I thought this was pretty funny when I saw it at Target. 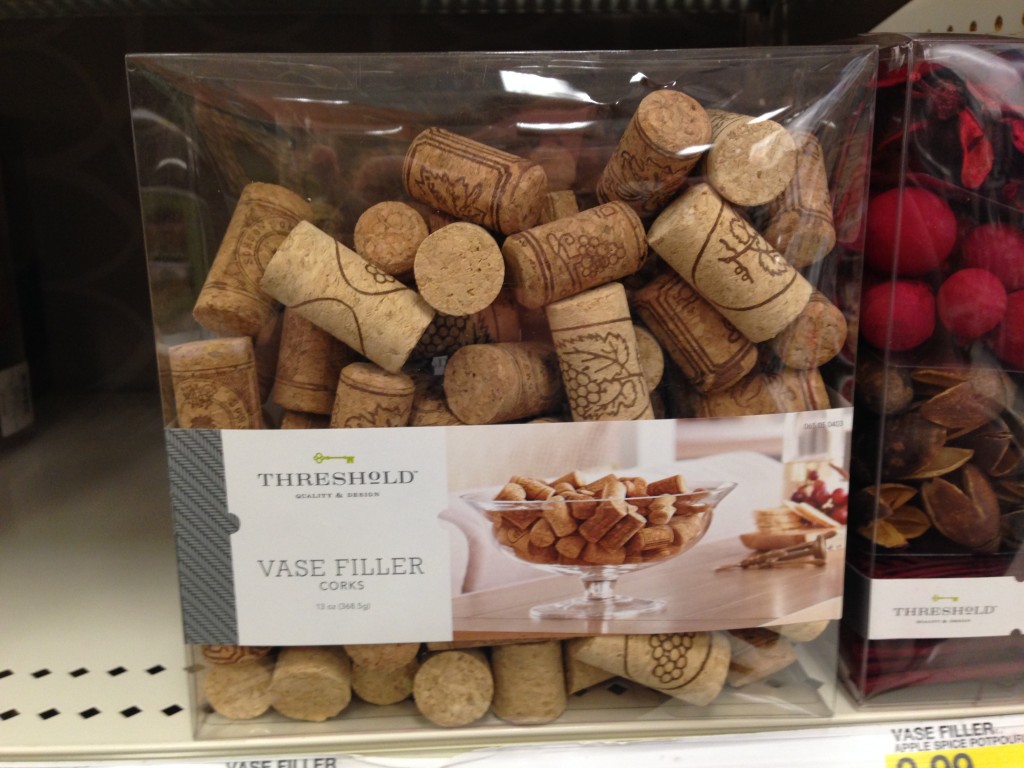 What person wants to fill a vase with corks from wine they didn’t actually drink? It doesn’t make any sense to me.

This is a new low in our immediate gratification society.

I think this is worthy of a bless my heart, and I’m not even southern.

I’ve had this story swimming around in my brain for a couple of months since our return from France, so when Mama Kat‘s “Bra” prompt was posted, I jumped at it. For the men among my readers — you have NO IDEA how difficult it can be to do something as simple as buying a foundation garment.

The great bra adventure — we ladies have all done it.

Capturing our girls and depositing them into the most flattering and hopefully sexy undergarment we can afford. Finding the right bra is right up there with trying on swimsuits, but since I no longer care about swimsuits, the great bra adventure was my most traumatic experience in recent times.

I remember the exact minute when I had finally dieted my way to a 36C — a lovely size where I could find cute and sexy little pieces of lace and elastic in which to deposit my girls. Unfortunately, the way I got to be a 36 C was to “eat” nothing but coffee for most of my day. Not such a good idea in the long run of life, and not one that lasted very long.

Many years and many pounds later, I’m a 44 DD. I’m living up to what my father called my “sturdy German girl” heritage. I can’t believe I’m actually putting this down for all to see, but I’m going there — right now.

It was time to bite the bullet.

I needed some new bras for our upcoming vacation; I decided that I could not leave my worn bras with frayed elastic out to dry in hotel rooms. I got all excited about going to a local lingerie store called Betty Schwartz — she’s a legend in the Chicagoland area. I “may have” thought I was going to encounter the ladies and the stock featured in Double Divas, but I was dead wrong. I walked into the store for a fitting, was surrounded by ordinary white, beige, and black lingerie and a MAN! No beautiful lacy underwire bras, no corsets, no garter belts, and no Molly and Cynthia. Remember when Ven on Project Runway was so dismissive of the plus-size woman he had to dress? I was not going to put my girls out on display for a salesman, even if he works in a lingerie shop. Thank goodness he called for reinforcements and a woman came out of the back room to fit me.

The story started badly and ended even worse.

There was only one bra in the store that fit me, and not a single black bra for me to even try on. I bought the bra, and ordered another one to be delivered to my house in time for the vacation. I wore it the next day, and found that the underwires in the center poke out when I sit down, thus creating a third “girl.” Could it get any worse? Well, maybe.

I went to every plus-size store in town and several department stores, all the while knowing that some security person was laughing hysterically while watching me try on ten bras at each of these dressing rooms with no luck. Finally, at Torrid I bought an underwire bra that practically could stand up and tap dance on its own. It definitely did good things for the look of my girls, but I would need to buy all new clothes in order to accommodate the padding plus underwire, and I’m pretty sure I might attract some undesirable attention. After wearing it at home, it became clear that I would need a smaller size in this bra. After actually thinking that I had a winner, I had to go back to Torrid to return the sucker.

Rethinking my choices, I decided to go to Penney’s and resort to the old lady’s comfort bra, the Playtex 18 Hour 4088. It has a band around my ribcage that doesn’t cut off my circulation. Check. It has thicker straps so that my shoulders don’t get any deeper grooves than they already have. Check. And it doesn’t have underwires that poke me under the arms or stick out like a third breast. Check. And they had three of them in pretty beige and white lace. I was sold.

But wait. I wear black all the time and I needed black bras for this trip and STILL didn’t have a new one. So now, to add insult to injury, I had to go online to order two more in black and hope that they would arrive in time for my vacation. I found them at amazon.com and had them in time for the trip, saved once again by internet shopping.

The ladies I traveled with for this vacation were discussing among themselves what they would pack and what their husbands would need. What a relief it would be to pack like a man — underwear, socks, chinos, button-down shirts, and a couple of pairs of shoes. No concerns about whether one’s underwear is black or white or whether the leopard print bra will show through. No concerns about whether to bring a skirt or not, and if you do, what shoes will you wear with it? They don’t have the packing dilemma that women have when preparing to go on vacation. And I’ll bet that it’s a rare man who has to bare his “appendage” in a public dressing room to see if it fits in his boxers. I’m just sayin’ . . .

Fast forward to our homecoming from France. The bras worked well, even the one with the pokey underwire, and all was well in bra-land — until I remembered that I had paid IN ADVANCE for the underwire bra that I ordered from Betty Schwartz. Not only did it not arrive in time for the trip, it never arrived at all. I couldn’t find the receipt in my stack of papers that accumulated from the trip, but decided to call anyway, and the same guy answered. He told me that they don’t store their special orders by customer name, they store them by the manufacturer of the bra. I didn’t know the manufacturer (since I was on my cell phone), so he couldn’t look to see if the BRA I PAID FOR was even in the shop.

The next day I got a call from a lovely young woman telling me that the black bra I had ordered was in the other location of Betty Schwartz and she asked me if I wanted to come in and try it on. Now we are about six weeks out from my original visit and she’s not talking about the bra I PAID FOR! I told her the whole sad story and she found my original bra — it was in the wrong location and they had never called me or sent it out. Finally, I found someone who provided customer service and she sent the second pokey bra out in the mail. It arrived and I thought I was finally done with Betty Schwartz.

Then they called me again… wondering if I wanted to come in to try on that damn black bra.

I was polite. I really was.

Thanks to Mama Kat for allowing me to get this story off my literal and figurative chest. I’m guessing that my “bra” story is going to be only one of many. It was cathartic, but now everyone is going to know my bra size. Oh, well — my girls can’t hide in real life, so there’s no point in worrying about hiding them online.

I guess the old adage holds true, even in the virtual world. If you’ve got ’em, flaunt ’em!

Be sure to stop by Mama Kat’s Writers Workshop and make some new friends!

I know — it’s Sunday, not Saturday.

We had a busy day yesterday with a funeral and some touring in an area we don’t often go to. The wind was blowing and it was a beautiful sunny day. I tried to catch the movement in these flowers.

But I’ve been saving up some fun stuff for you to look at. I’m linked up today at Vanderbilt Wife; I hope you enjoy reading these curated lists of goodies!

Happy Tuesday. Thirty-four years ago today, God said, “Let there be Timothy Andrew, and it was good.”