Yes, I typed that right. EATALY — a very cute pun on Italy, but Eataly is more than just a cute name. It’s truly a foodie fantasy destination right here in Chicago. 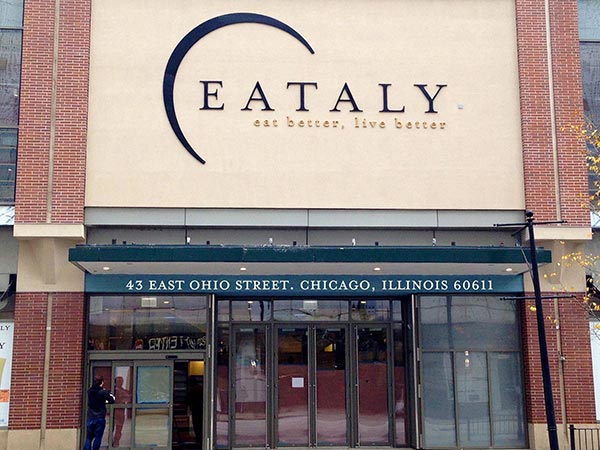 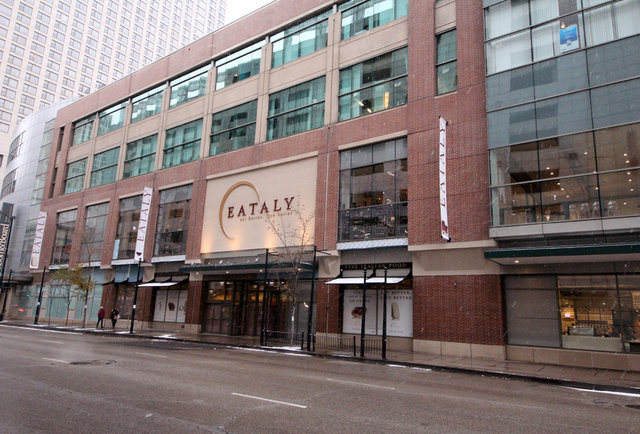 Co-owned by Mario Batali and Joe Bastianich, the Chicago location is housed in the former ESPN Zone location near Michigan Avenue at Ohio and Wabash. The 63,000 sq. ft. food palace is the second Eataly location in the U.S. The only other U.S. outlet in New York opened in 2010, but media hype says that the next location will likely be in Philadelphia.The first Eataly opened in Turin, Italy, in 2007 and there are now Eataly locations in many major Italian cities. 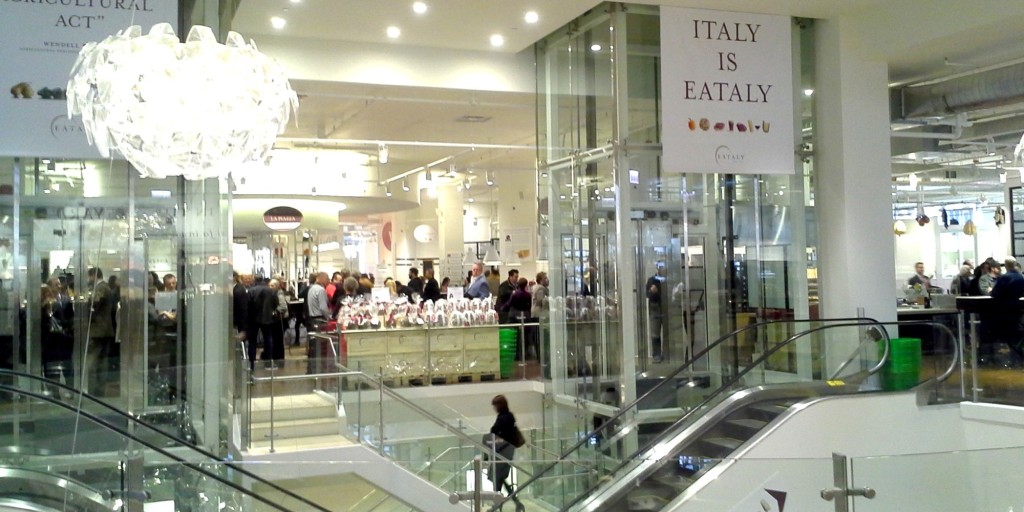 Eataly Chicago is a foodie destination with 23 restaurants and food bars, one fine dining restaurant and lots of food products for sale. Upon opening on December 2, 2013, Eataly was overrun with locals and tourists, which resulted in its having to close for one day on December 9 in order to restock after its first week of business. We waited until the Sunday after Christmas to venture downtown to check out Eataly and I was not disappointed. It’s a foodie’s paradise. 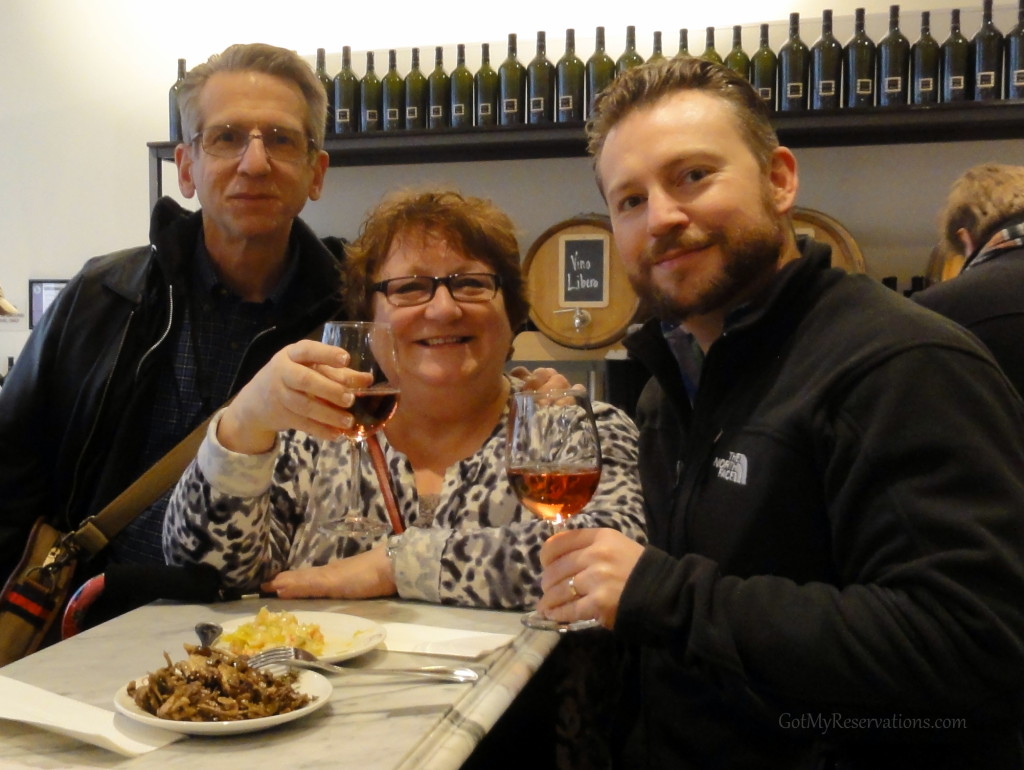 Our first stop was at a wine bar to begin our adventure.

Imbibing is a big part of Eataly’s strategy. Batali refers to Eataly as giant bar, encouraging shoppers to have a drink, wander the store and happily partake of the bounty (source). 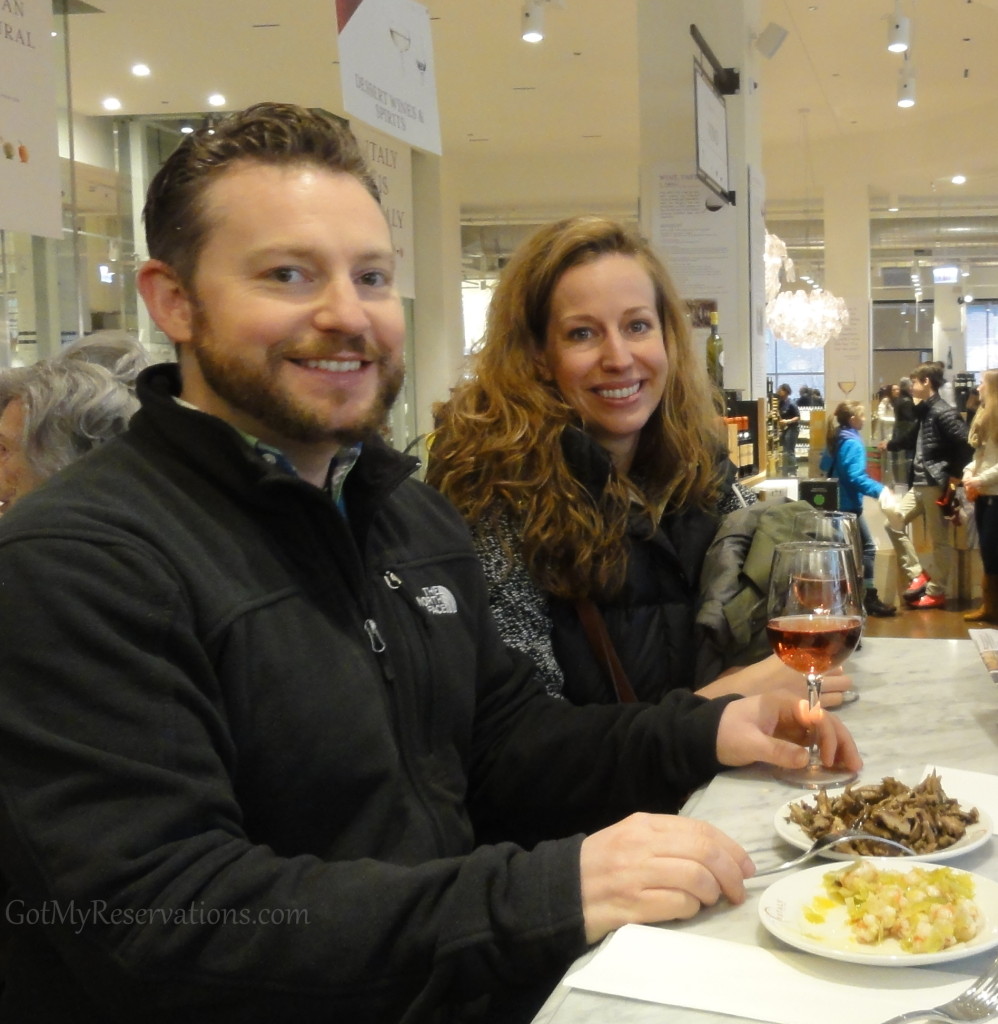 We started with some sparking rosé and two salads. Darling DIL asked how the mushrooms were prepared — roasted and then pickled. YUM! The shrimp and leek salad disappeared so quickly that I barely had time to photograph it. 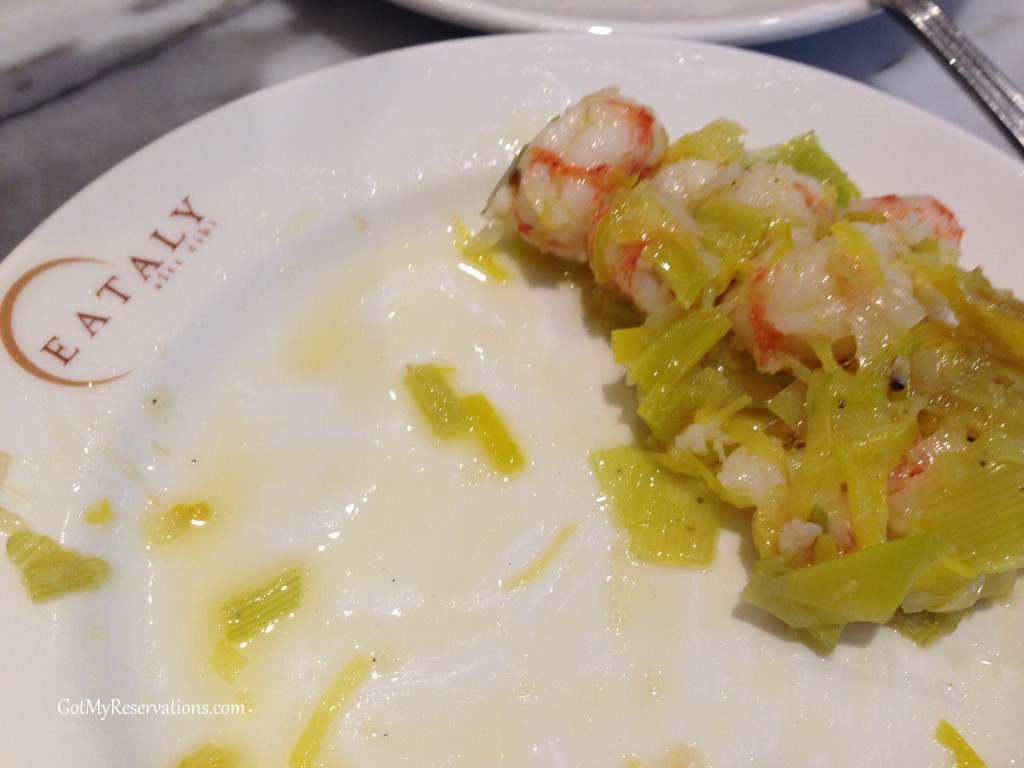 After confirming that it was not only okay to wander around with a glass of wine, but encouraged, we started our grand tour. It was like seeing a food version of Oz for the first time — charcuterie, cheese, and bread everywhere your eye traveled. 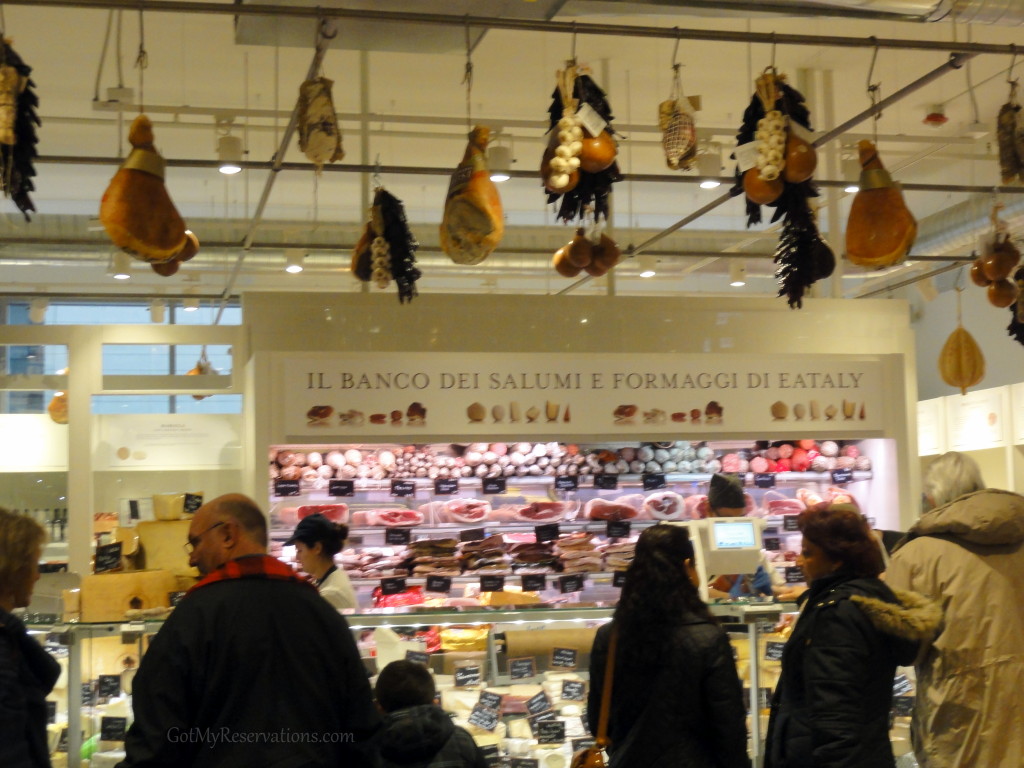 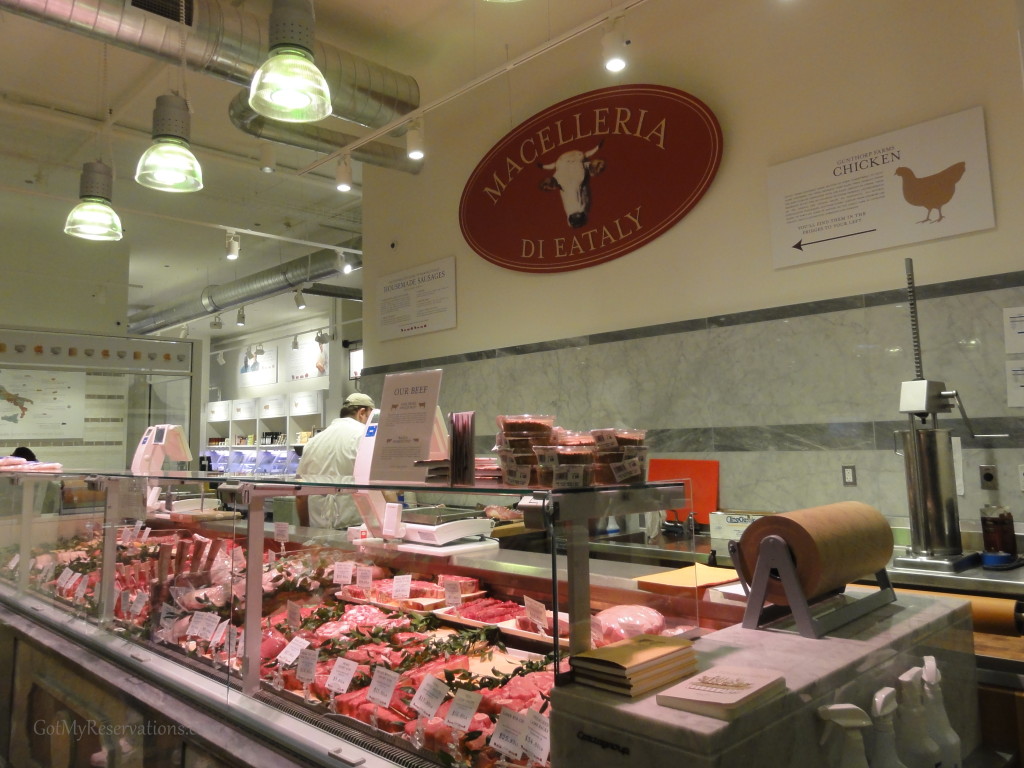 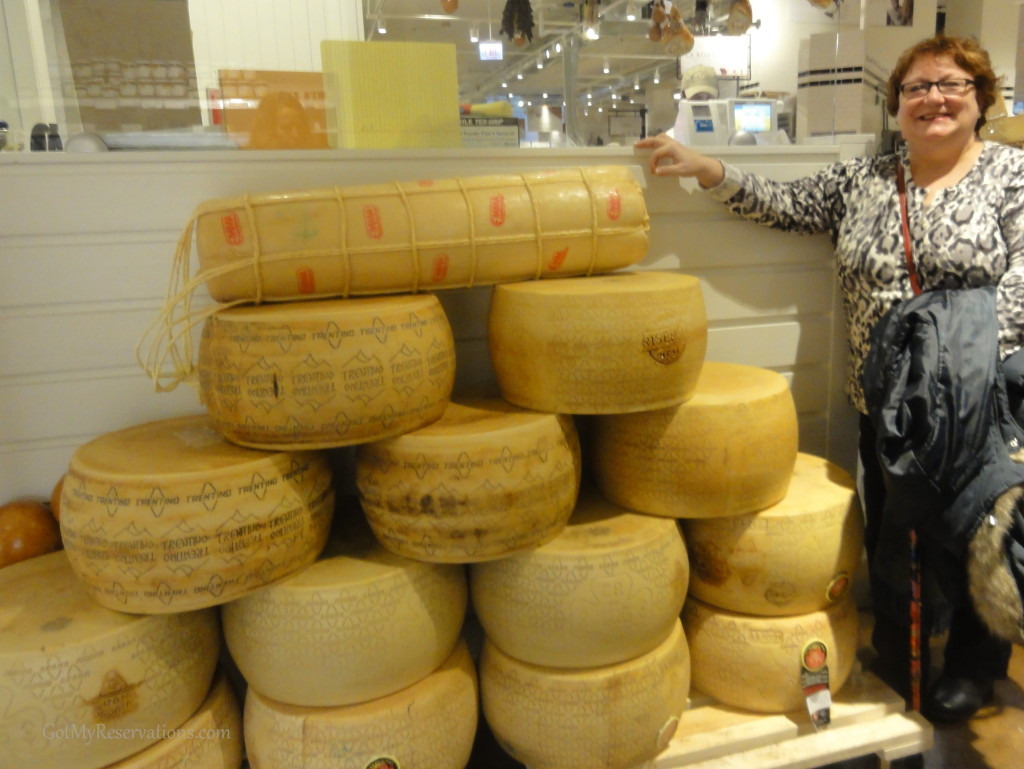 The worst part about going to Eataly on a cold winter’s day is that you have to carry your coat around with you. I took my cane for extra protection, in case I had to ward off marauding knee injurers. 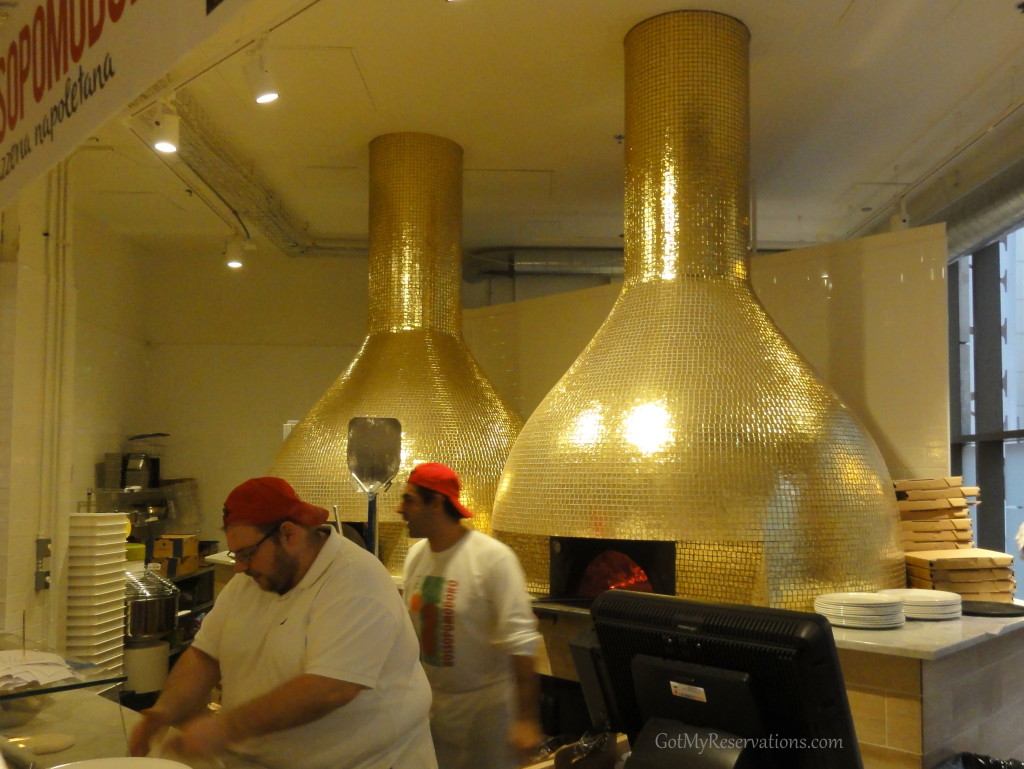 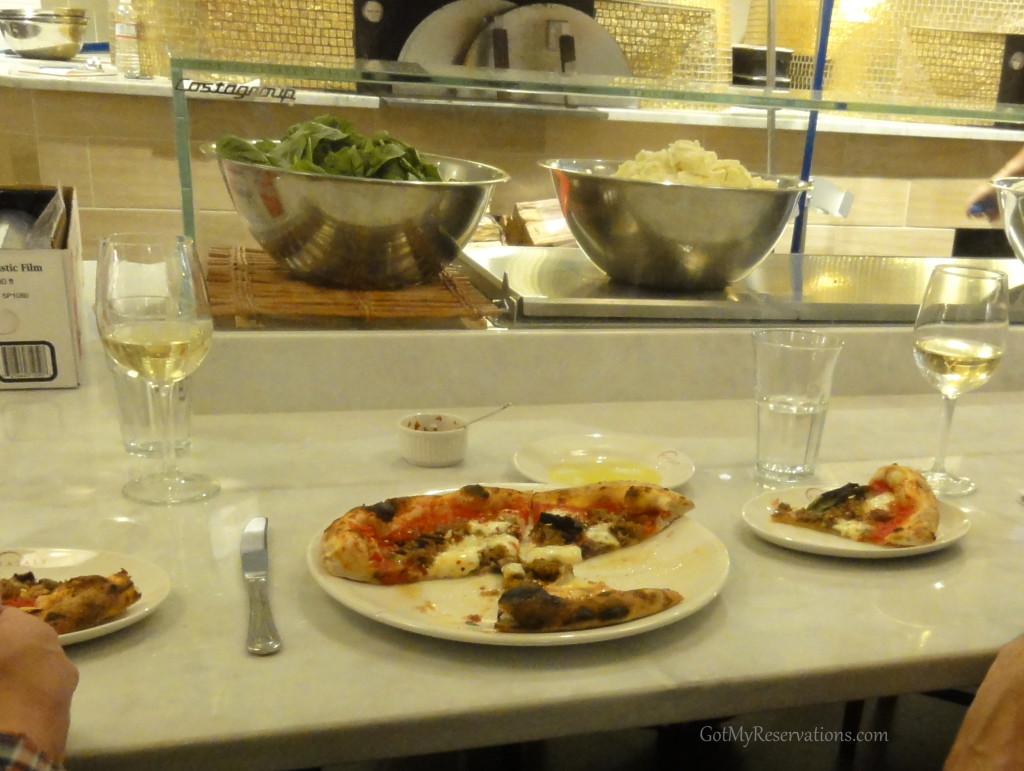 These nice guys let us take a photo of their pizza. Never underestimate the power of a pretty girl with a camera — my gorgeous DIL.

For our fish course, we tried several of the offerings. All were perfectly prepared. 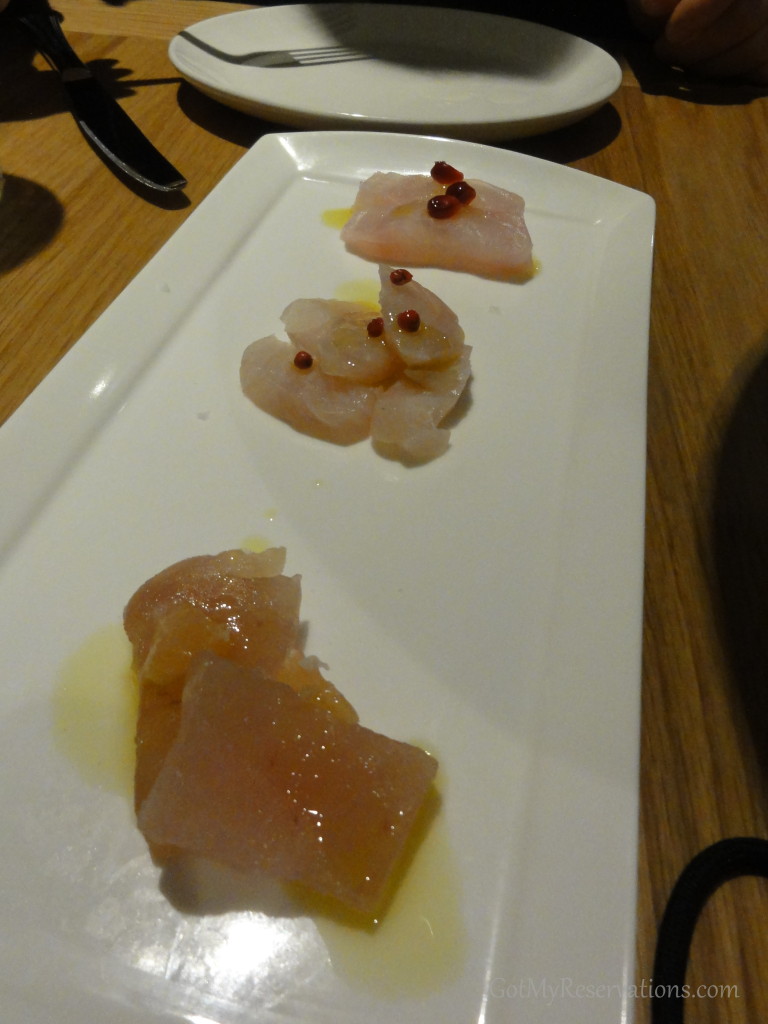 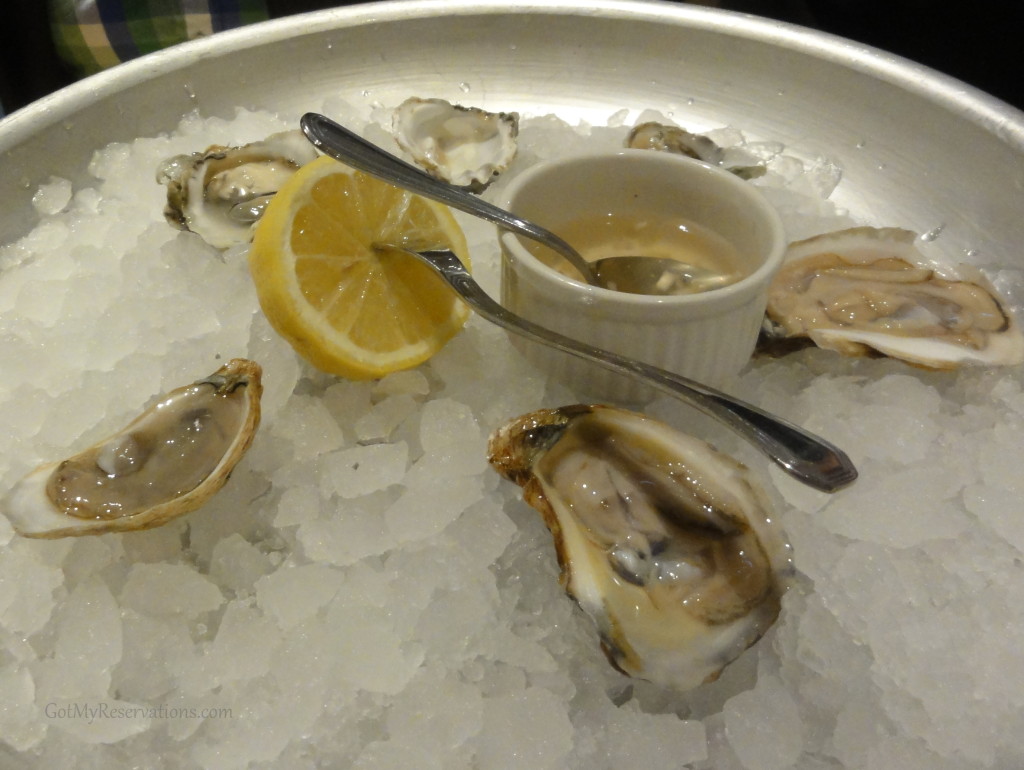 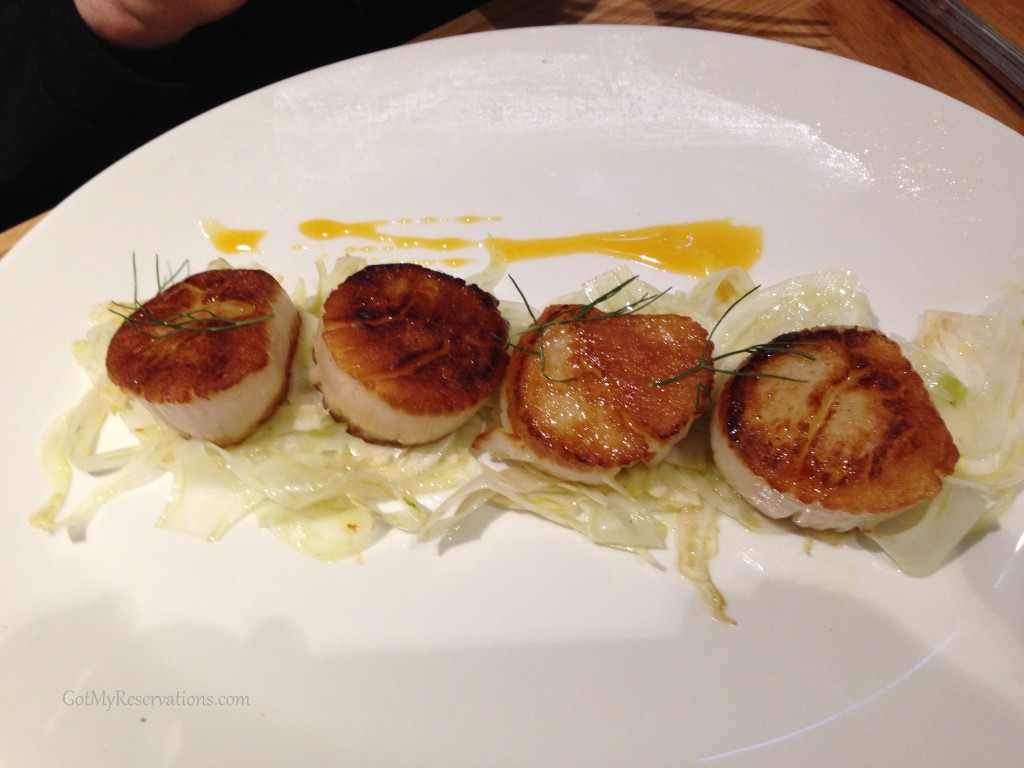 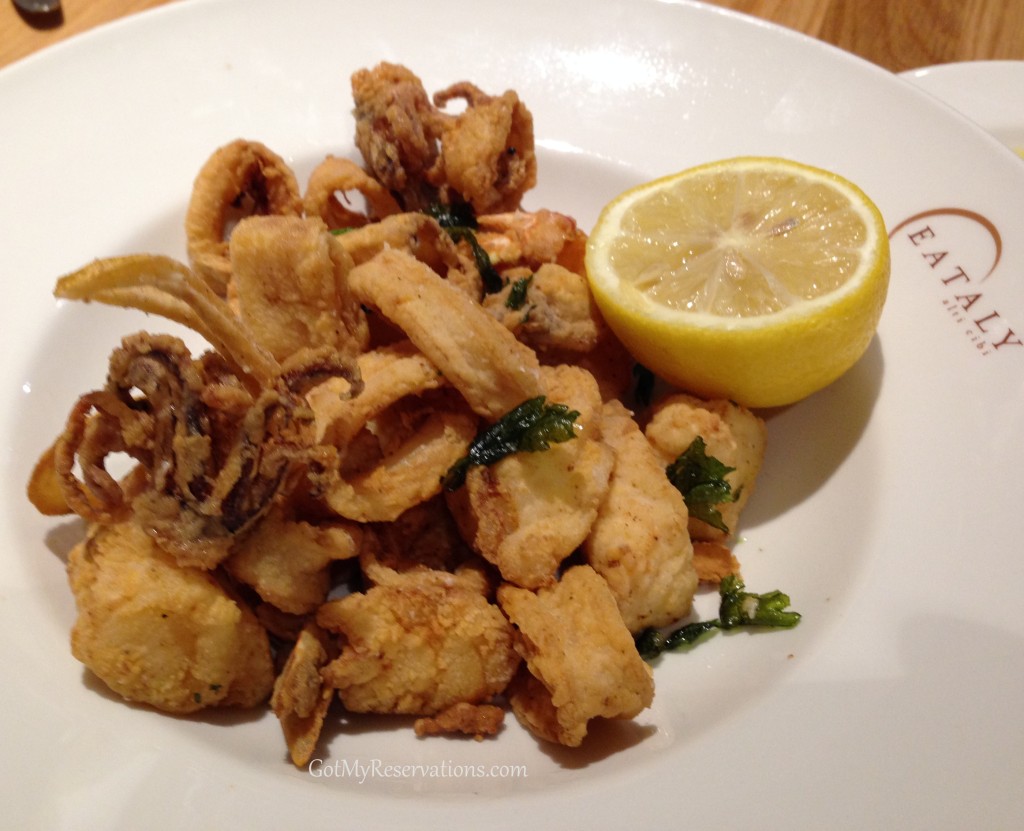 We made a stop at the meat restaurant, which has a sit-down area and counter service. We chose the counter so that we could continue to people-watch. We also enjoyed our server, Dan, and went back to him when it was time for drinks refills. 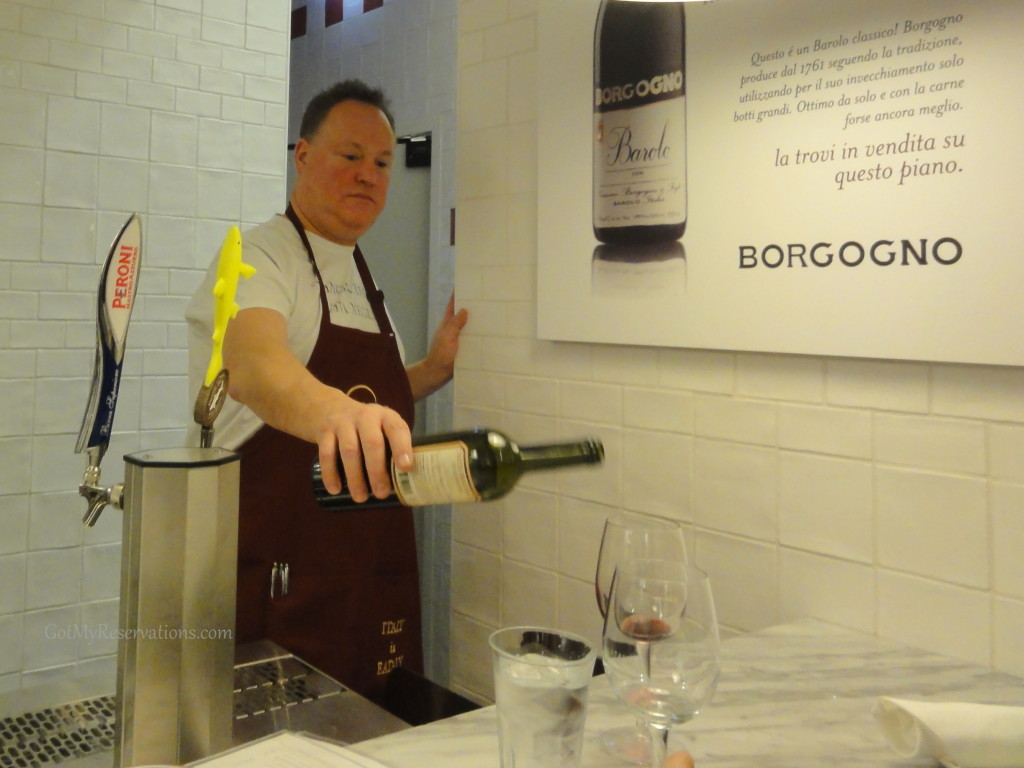 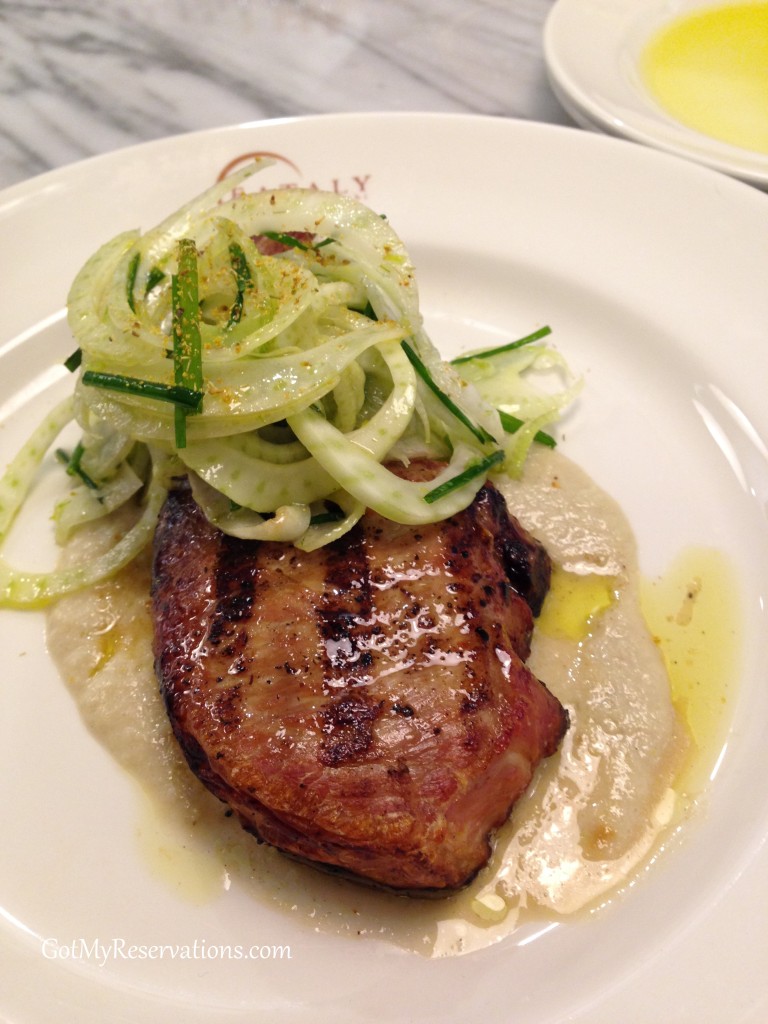 Music Man and I shared a pork loin entree. It was perfectly cooked and seasoned. 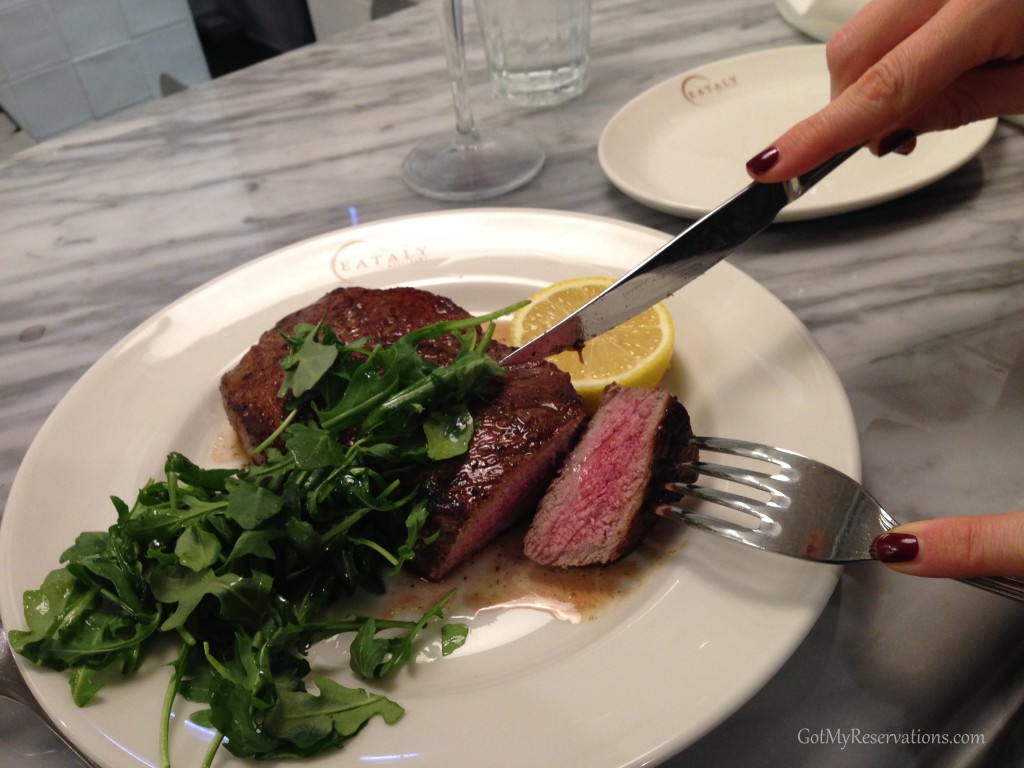 The beef was medium rare, just as requested. 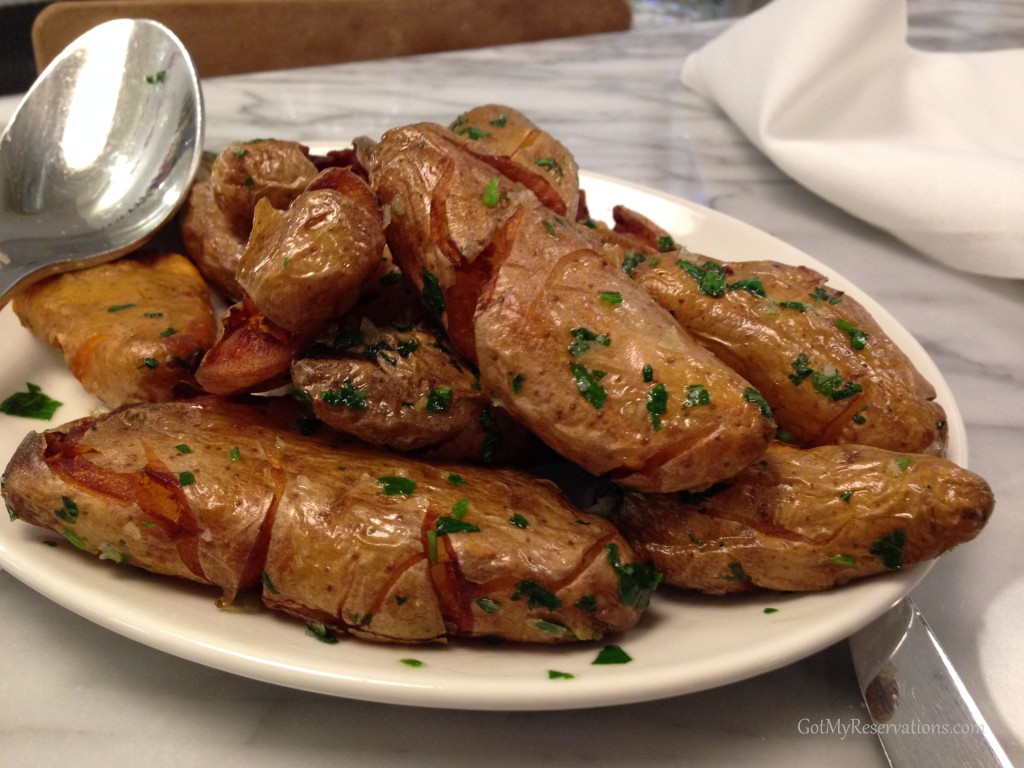 The potatoes were roasted and smashed — a wonderful accompaniment to the meat course. 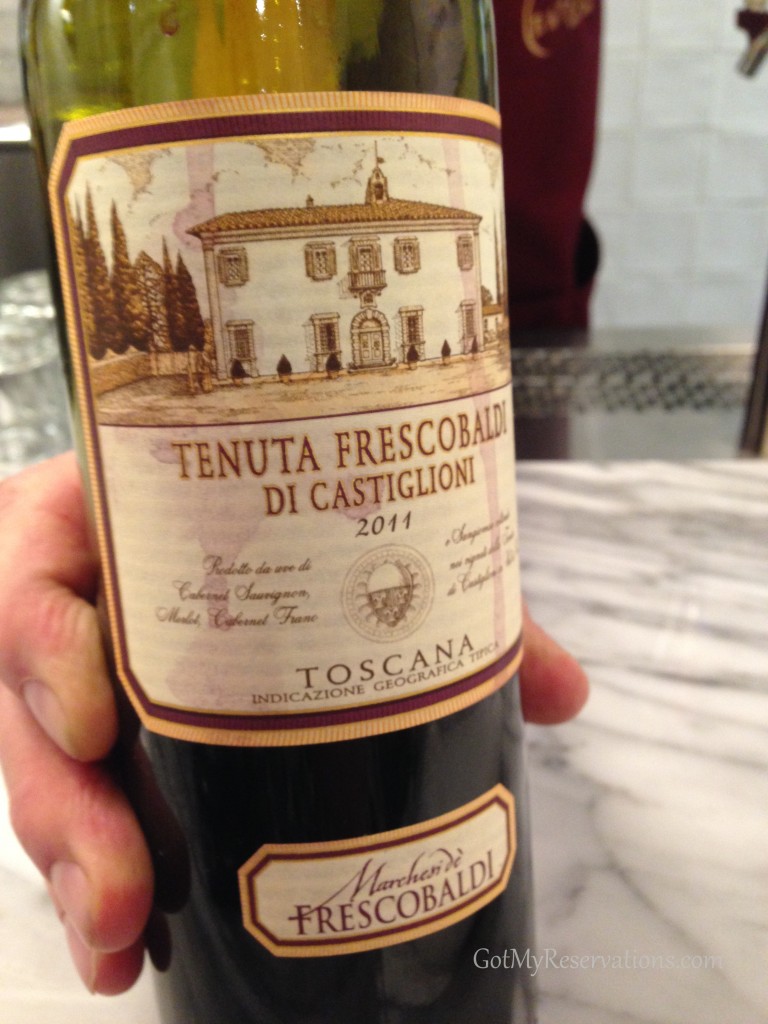 We took a picture of the wine so that we could remember the name for the next time. 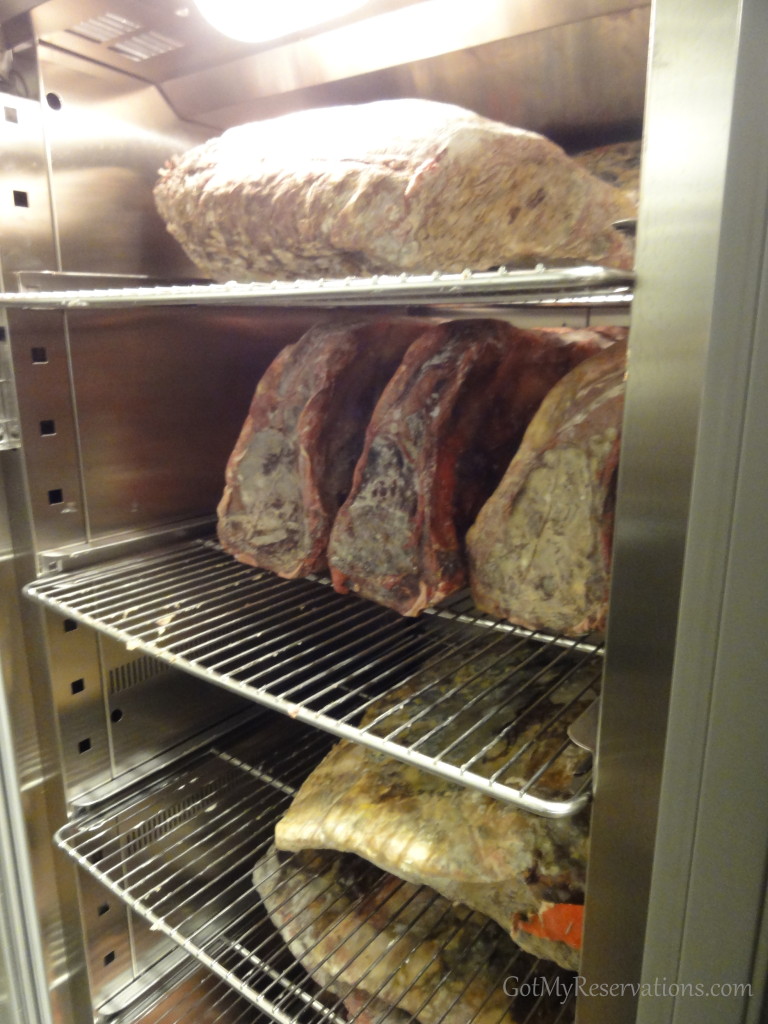 The aged meat fridge was right behind us, in full view of the shoppers.

The frozen specialties were indeed special — with prices to reflect their specialness. 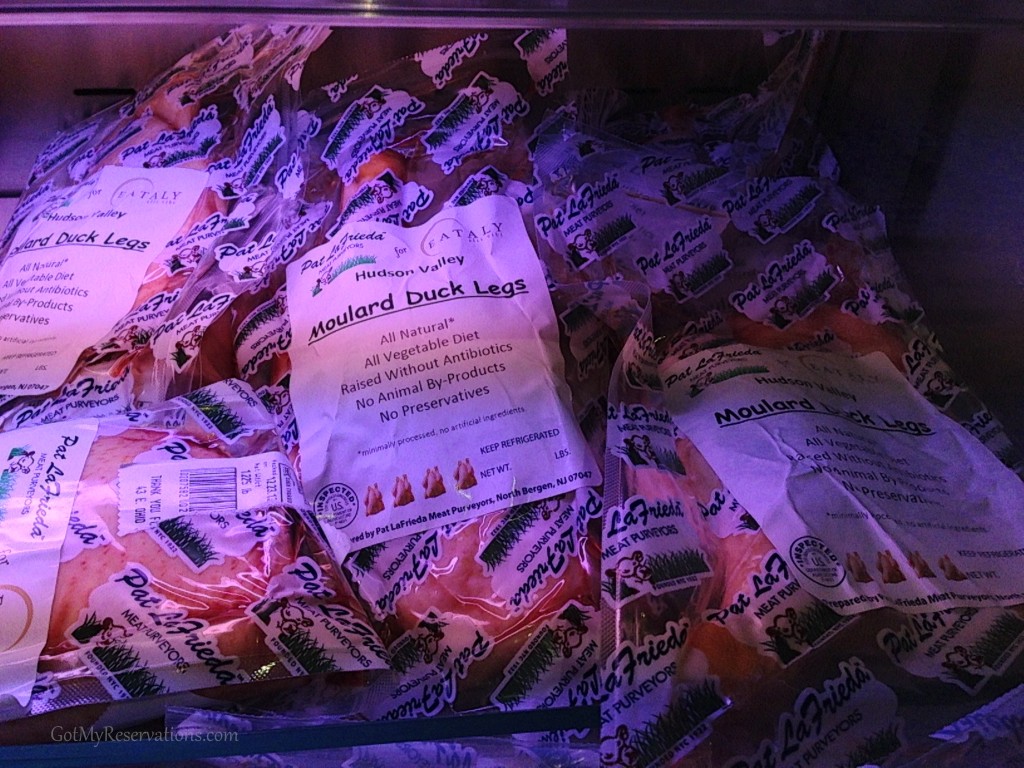 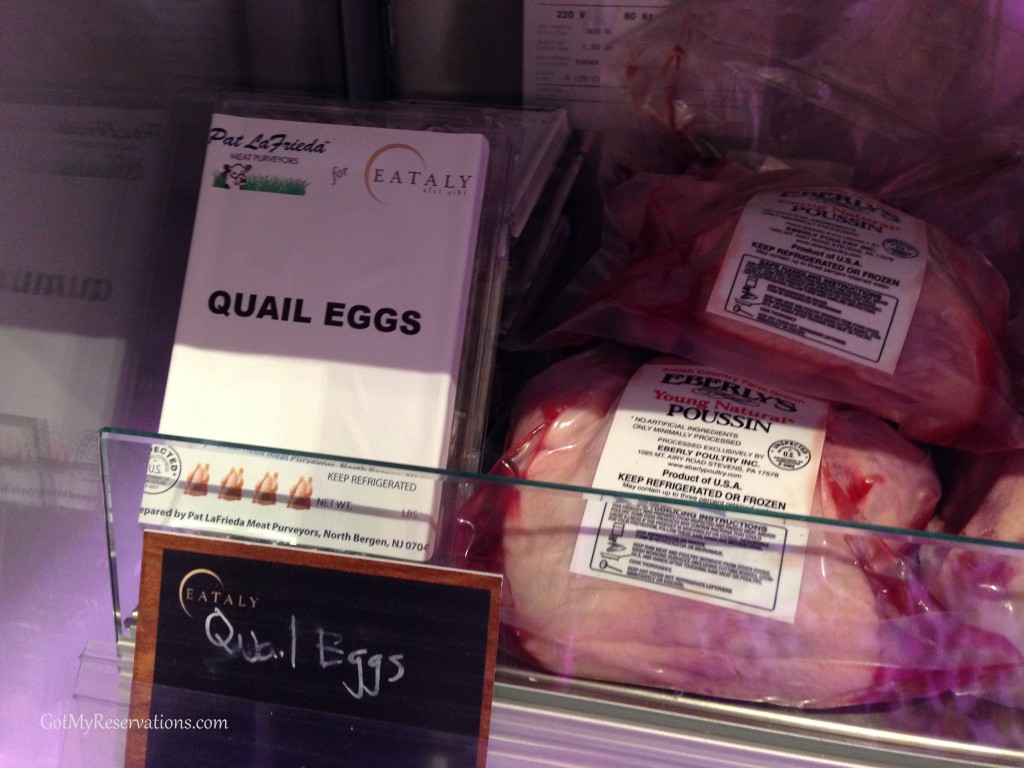 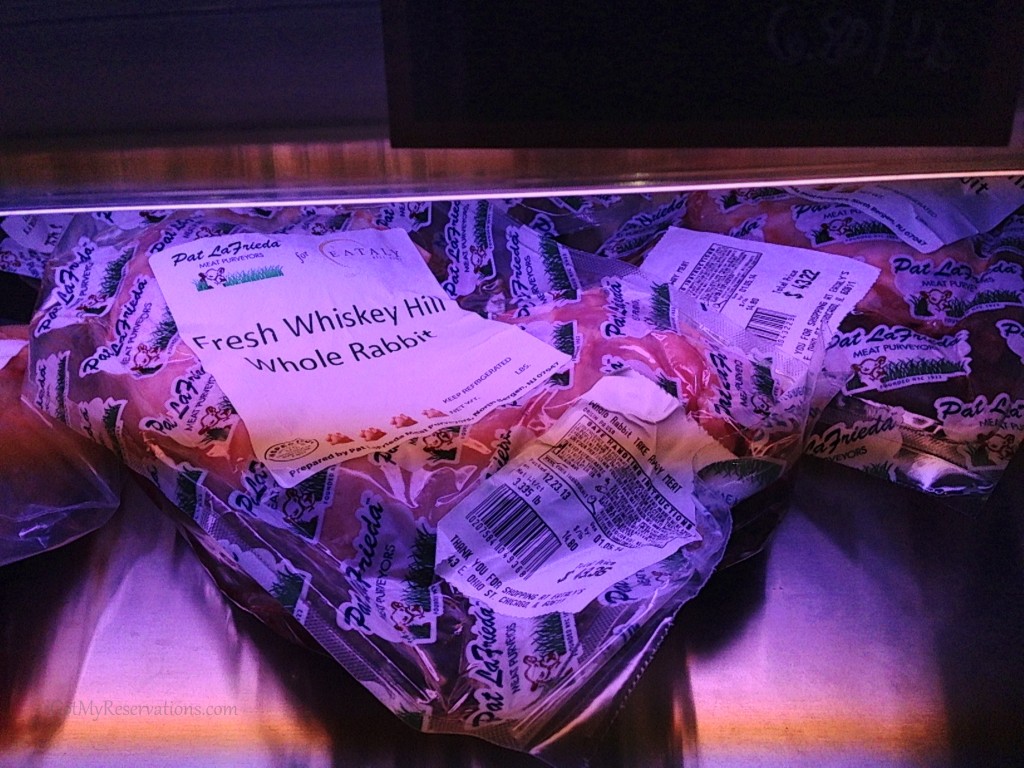 There were also cases full of veggies and to-go items for lunchtime shoppers. 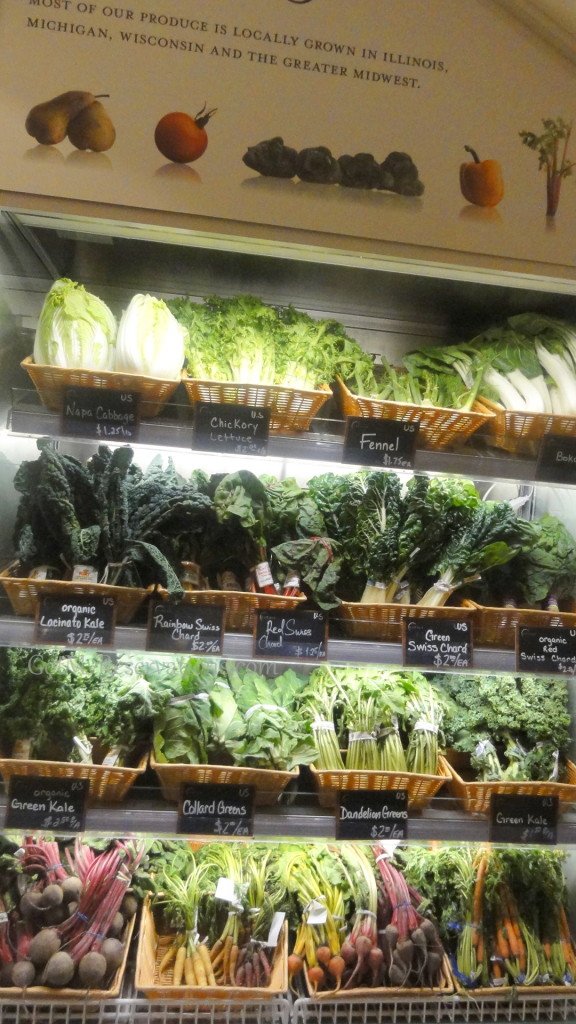 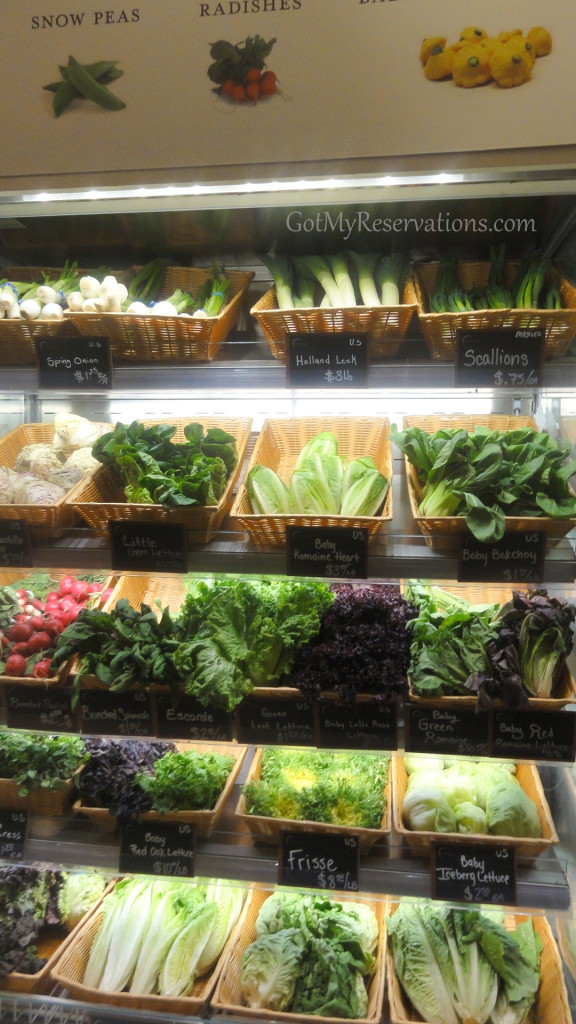 Just in case you haven’t seen enough, here’s the map of the two floors of Eataly. Click into the map to get a printable version. 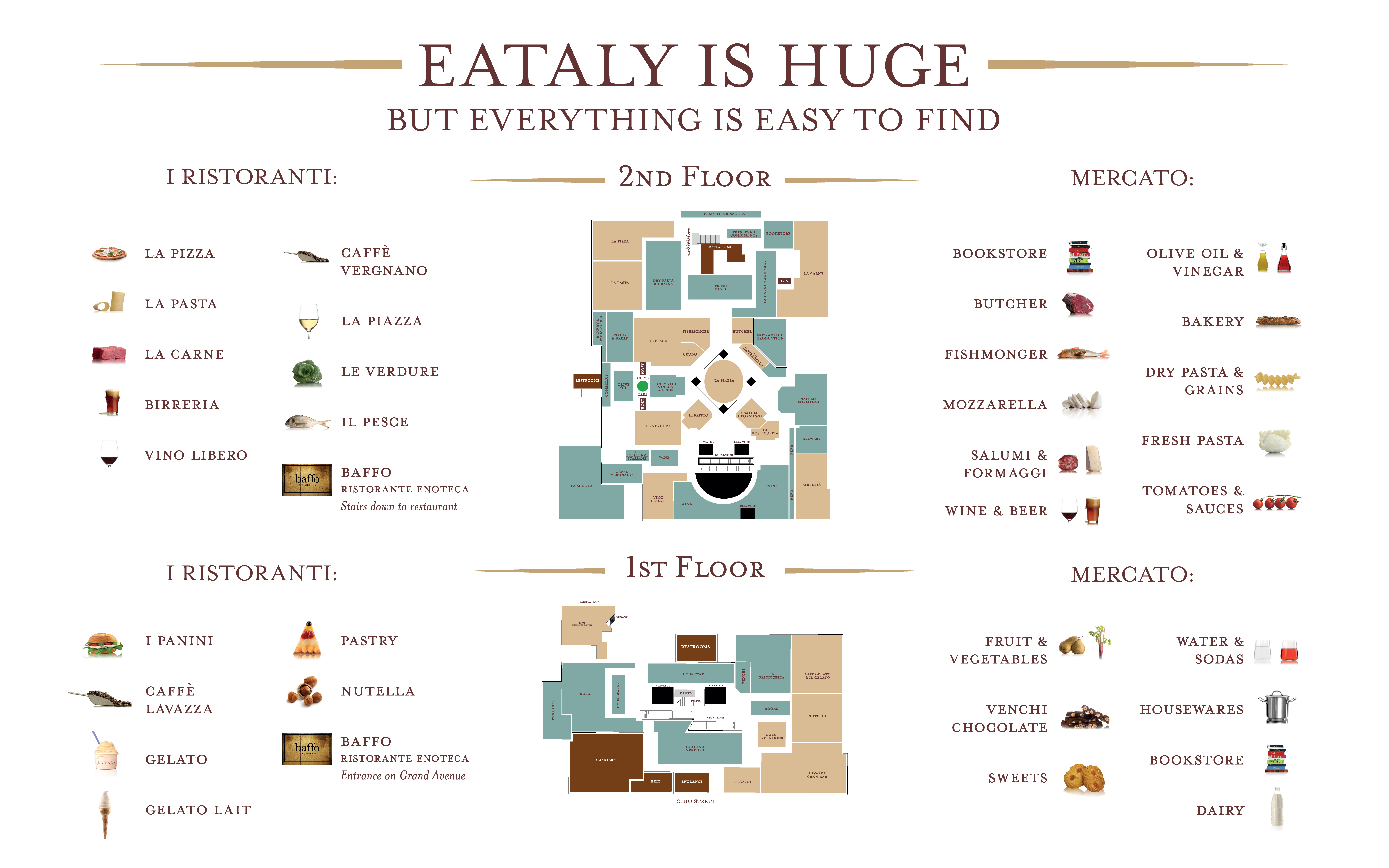 So, my friends, if you love food and you find yourself in New York or Chicago, put Eataly on your must-do list. I can’t wait to go back!