If you’ve known me for any length of time, either personally or social-networkily, you probably also know that I’m a Frances Mayes stalker. Trust me, if I ever get to Tuscany, the first place I’m going is Cortona and you’ll see my photo standing in front of Bramasole all over Facebook and my blog.  I know she doesn’t live there anymore, but maybe she’ll come back to check on it and come out to say hello to me. One can only hope.

Katherine: It’s a nice little villa. Rather run down, but redeemable… Are you going to buy it?
Frances: The way my life is currently going, that would be a terrible idea.
Katherine: Mm, terrible idea… Don’t you just love those?

There are many memorable quotes from my all-time favorite movie, Under the Tuscan Sun (see my review here), but this one is probably my favorite, because my life is full of terrible ideas. And I love them — most of the time.

So how does this relate to my blog? If you were sitting here in my office with me, I’d invite you to check out my Drafts folder in WordPress. Over the last 2 1/2 years, I’ve published 219 posts — averaging about twice a week. That’s not so bad, considering I have a full-time teaching job. But wait. I also have 77 unpublished drafts in there. That’s an average of 2.56 per month that I DIDN”T publish. Why not? Were my ideas so terrible that they weren’t worth the light of day?

The oldest draft is from October, 2010, and the title speaks for itself. “Things I Love: Free Time” — there’s nothing written in that draft beyond a cute topic sentence. I wish I had made time to write that one; it would be interesting to read what I was worried about at that point in my life. I’m still looking for free time.

Recently I started going through old recipes boxes that we got from my husband’s aunt. She’s almost 103 years old, and I was going to do a recipe series where I cooked her “receipts.” I actually made Golden Shrimp Casserole and photographed the process. I never published that draft because the casserole was TERRIBLE. I think we finally threw out the last of it after we tried to cover it up with cheese to make it palatable. So much for “Aunt Rachel’s Recipes” from January 8, 2012. Trust me, I’ll never publish that one.

Then there was last week’s unpublishable rant about something at school. Let’s just say I thought better about publishing it — maybe I’ll put it in my book about 100 Things I Never Want to Do Again when I retire. It was definitely a terrible idea to publish it, but at least I got it off my chest and it’s safe in my computer. Or is it…?

The good news, for those of you that enjoy my book reviews, is that there are four GOOD ideas waiting to be finished up and published. I think you will love reading about The Provence Cure for the Brokenhearted — a very good book. Interestingly, the premise of that book is a terrible idea that turns into love and happiness for the characters. 🙂

P.S. I’m pretty sure I AM going to publish my rant about who put Adele in this ugly dress when her amazing talent deserves a truly amazing dress. Did they think we couldn’t see the grandma underslip she was wearing, apparently so she could wear the support bra she definitely needs? I mean, really. More on little black dresses that WORK on another day.

P.P.S. Thanks for staying with me. I made a goal to try to keep my posts under 500 words, but this one slipped over the edge. I hope it was worth your time.

If you’re like me and love to armchair travel, you’ve probably already read Under the Tuscan Sun and quite possibly, you’ve seen the movie starring the glorious Diane Lane. If you’re like me, you’ve wallowed in the thought of coffee on the piazza in Cortona and actually meeting Frances Mayes. And, if you’re really like me, you’ve done all of these things multiple times — like gobs. Since I just finished listening (for about the tenth time) to Frances Mayes reading her own book courtesy of my car stereo, I thought it was time to put my writing where my ears and eyes have been for the last thirteen years since I first discovered Mayes.

Mayes was originally a poet, and it shows up in all of her prose. Her descriptions of her purchase, renovation, and life in an Italian farmhouse are lyrical. One of the story lines that resonates especially well with me involves the going back and forth between San Francisco and Italy, and how each trip to Italy represents a new step in the renovation and renewal process. Since both Ed and Frances Mayes are professors, their rhythms follow the academic calendar, and so do mine. I know what it is like to have a list a mile long, waking up that first blessed morning of “vacation” ready to face the next round of cleaning, gardening, and renovating. As each Italy vignette unfolds I can almost physically feel Mayes relax, enjoy Cortona at Italy’s pace, and then gear up to return to her life in San Francisco. Maybe that’s why I originally loved her style so much.

As Mayes continues her story beyond renovation, the reader is treated to visits to restaurants, cathedrals, and vineyards. That’s my kind of travel and since it’s all written in first person,  I can imagine myself touring Italy — with husband driving, of course! The sequel to Tuscan Sun, Bella Tuscany, is more of a travel memoir than Tuscan Sun, but continues Mayes’s love affair with Italy, its food, and its slower paced lifestyle. 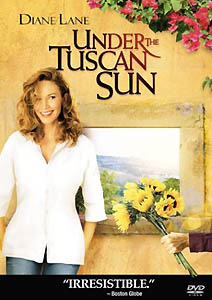 Mayes’s book was made into a Under the Tuscan Sun (Widescreen Edition) movie of the same name and stars Diane Lane. Although it’s not even remotely the same, I love the fantasy that Audrey Wells created using Mayes’s original story. The characters that revolve around Frances (Lane) bring new depth to factual pieces of Mayes’s life, such as divorce, the support/lack of support of friends, and reinventing herself both literally and figuratively. Who cares if they aren’t exactly true? The movie was filmed in Cortona and other locations in Italy and is a visual treat. It’s a movie I can watch again and again.

You can imagine my surprise when I read the reviews of Under the Tuscan Sun on Amazon. Tucked in there among the glowing recommendations are some negative thoughts about Mayes; the best is calling Tuscan Sun “Martha Stewart does Italy.” As a person who used to video tape ALL the Martha Stewart episodes before there were DVRs and online reruns, I’d actually call that high praise. Sadly, that reviewer just doesn’t get who Mayes is as a writer. I think I do.

I’ve gobbled up the rest of Mayes’s books, including Swan, a kind of Gothic mystery set in the South,  and A Year in the World: Journeys of a Passionate Traveler, another travel memoir that takes the reader beyond Italy. The coffee table books about Italy are beautiful and deserve a check out from the library. I haven’t read her poetry book, but may look for it in the library. In researching this piece, I’ve discovered that there’s a brand new sequel to Tuscan Sun, and I’m going to use my end-of-the-school-year gift cards to buy Every Day in Tuscany: Seasons of an Italian Life. Its reviews tell me that I will probably love it, since the types of things that the reviewers don’t like are the ones I liked about her other books. I’ll let you know. I also discovered that she now longer lives in San Francisco, and has gone back to her Southern roots by purchasing a home in North Carolina.  She blogs relatively often at Frances Mayes’s Journal, and the posts reveal a pretty down-to-earth human being.

Finally, a note of caution. Frances Mayes apparently has been happy to ride on the bandwagon of fame and has some spin-off credits under her name. You can buy “At Home in Tuscany” furniture through Drexel Heritage and she and Ed hawk Bramasole olive oil on the internet. You can even buy Bramasole flatware, but I think this product is just capitalizing on the name. It’s pretty, though, if you’re in the market! And, if you’re actually lucky enough to visit Cortona, the city web site gives you explicit directions on how to get to Bramasole.

I leave you with my favorite quote from the movie and another blogger’s summary of its source.

“Terrible ideas…don’t you just love those?” (Movie quote from Under the Tuscan Sun) This was a line in the movie by actress Lindsey Duncan, who played the captivating Katherine in the movie. The statement was made when she first meets Lane’s character, Frances, in Tuscany. Katherine asks Frances if she is going to buy a villa that she is looking at posted on the wall. Frances chuckles about what a terrible idea that would be given her circumstances. At this point, Katherine looks at her mischievously and says this wonderful line, as if daring Frances to go ahead and buy it.

Terrible ideas sometimes turn out to be our best ones. I think that for Frances Mayes, buying this rundown house was probably a terrible idea, but it led to my love affair with Mayes’s writing and her beloved Cortona, Italy. I thank her for having a crazy idea and following through with it.

This post is just full of Amazon links. Feel free to purchase through my Amazon Associates account; it may help pay for my long-awaited trip to Italy!