After Friday’s Travel Diary post, I’ve had several requests for the quintessential book about the Tudor Court. Clearly, I cannot name just one. Impossible. I can, however, give you a glimpse into a reader’s history and how I developed a passion for Anne Boleyn’s story. 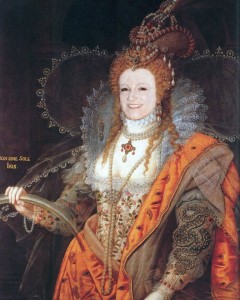 Yes, that’s me inserted into the Queen Elizabeth I painting. My son gave me this for my birthday last year!

I came into my obsession through a couple of different avenues, but we’ll start with my childhood reading. As a precocious reader, my parents let me run amok in my hometown library, and I devoured everything I could find about the Tudor Court. I was fascinated with how a man, even if he was a king, could somehow get away with having six wives and killing two of them — remember the old saying, Divorced Beheaded Died Divorced Beheaded Lived? I was entranced with how Elizabeth I got to the throne and at some point, I figured out why the current Queen of England was Elizabeth II. I was hooked.

When I began to teach American history, I realized that my students had no idea why the early English colonists left to start over in what they called the New World. The idea of religious freedom had little meaning if not compared to the religious situation the colonists left. Teaching my students about settlements in what we now call the United States made me want to know more at an adult level about the English Civil Wars and the Reformation in Europe.

Click into this family tree for more resources on the War of the Roses between the Lancasters and the Yorks and how a Tudor got to be king!

Learning about how the Tudors got to the throne made me finally realize why Henry VIII was willing to do just about anything to get a legitimate male heir. After all that his ancestors went through to get that throne, he was pretty determined to keep it — and why Elizabeth I was just as determined to not let marriage undermine her authority.

Click into this family tree to find out even more information about what happened to the Tudor line.

Enter current historical fiction and its magic. Most historical fiction being produced today is well-researched and written by fine writers who do a great job of creating compelling stories that are reasonably accurate. There are myriad resources available to the HF writer today; primary sources are collected and shared in great libraries and on the internet. The body of “domestic” documents (diaries, recipe books, household accounts written by women) that have been collected give the authors a much better view into their characters’ lives and it shows in the books they write. I read historical fiction with my internet browser at the ready so that I can either verify or expand on the material presented. It’s a good time to be a writer of historical fiction and an even better time to be a reader. There truly is magic in these books for the adventurous reader.

So what do I recommend? Let’s start with three female writers who are well-known for their work in historical fiction about this time period. I’ve read “quite a bit” of their work . 🙂

Phillipa Gregory is a well-regarded historian and author who has written many novels about the York/Lancaster/Tudor saga and her books are probably the most accessible of the three authors I have chosen for this post.  Her web site has a nice feature with her books set against a historical timeline. Personally, if I were starting my reading today, I would follow her timeline and start with The White Queen, the story of Elizabeth Woodville. This book helps set the stage for the rivalries to follow. Next is  The Kingmaker’s Daughters, which is followed by her newest and unreleased book about Elizabeth of York, who married Henry VII, thus starting the Tudor line. The Constant Princess depicts a fictionalized version of the life of Catherine of Aragon, Henry VIII’s first wife. The Other Boleyn Girl is loosely based on the life of Mary Boleyn, Anne’s sister, who was Henry VIII’s mistress and that relationship was one of the reasons used to declare the marriage between Anne and Henry null and void. The Other Boleyn Girl was also made into a movie starring Scarlett Johanssen. The Boleyn Inheritance covers the time period of Anne of Cleves and Katherine Howard, with Jane Boleyn finally getting consequences for her actions. The Queen’s Fool takes the reader into the problem of Mary Tudor, the forgotten heir to the Tudor throne. The Virgin’s Lover features Elizabeth I and Robert Dudley, and finally, The Other Queen is the story of Mary, Queen of Scots.

Hilary Mantel is the author of two highly-acclaimed novels about the Tudor Court, written from the perspective of Thomas Cromwell. Both Wolf Hall and Bring Up the Bodies have won the Man Booker Prize in England and are extraordinary extensions for people who already know something about Henry VIII and the political shenanigans that went on during his reign. The third book in the Cromwell trilogy is due to be published in 2015. I loved both of these books and am eagerly awaiting the third of the set.

Last but certainly not least is Alison Weir, also a renowned historian and novelist. She has written so many books about this period that I have just linked up the Alison Weir book list on amazon.com for you to look at. In checking out her online personna, I discovered that she actually leads British history tours. I AM INTRIGUED.

Although none of these ladies wrote a book about Henry’s last wife, Catherine Parr, there are a number of authors that have. I read one of them and was not impressed, but just in case, here’s a link that gives you some options.

More than you wanted to know? I hope not. After all, writers are readers and readers make better writers. I hope you will read some of these books and let me know how you liked them. Want to recommend something else? Go for it — I’m always ready for something new in this genre, and thanks for spending time with my great obsession today!