I had a duvet day today. 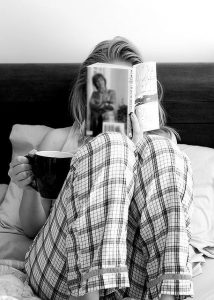 Frankly, I did not know that there was such a thing as a duvet day, but the picture tells the story. I’ve been known to stay under the covers all day and read, but today’s tale is not one of reading in bed. I was actually trying to get something done!

The big snuggly down duvet needed cleaning. It was only the hottest day of the summer so far, but I was determined that I needed to get this off the floor and put away for the summer. Did you check the date of today’s post? Summer is practically over, although it doesn’t feel like it today. Even after four years of retirement, I still think in “teacher calendar.”

I let my fingers do the driving first, and found a web site that said I should wash, then rinse the duvet twice, followed by many dryer cycles to be sure all of the feathers were fully dry. Otherwise, they would mold, being a natural product. It was also suggested that I put tennis balls in the dryer to help fluff up the down.

Music Man had some money left over on a laundromat debit card, so I went there first to see what type of extra-large washers and dryers they had. Two of each – check. The card had $1.03 on it and the place was kind of sketchy. Maybe not my best choice of the day.

I knew of another laundromat that a friend recommended, so I went there next. This place didn’t use a debit card, only quarters. The large washer was $4.50 per wash, so that would be $9.00 in quarters just to get the duvet washed and rinsed thoroughly. I couldn’t even bear to count up how many quarters it would take to dry the sucker.

I did a quick check on the price of tennis balls on Amazon – I was in the car and took the easy way out. Another two bucks.

On to the next option.

Imagine my relief when I discovered that my local dry cleaner would do the whole duvet for $19.99. Add it up, friends. It would cost about the same to wash that thing myself, plus the hours I would spend in a laundromat waiting for it to be done.

I went home, stripped the duvet cover off the comforter, and read the tag. DRY CLEAN SUGGESTED. Bam!

There’s a reason why God created convenience retailers. Let this be a lesson to you.