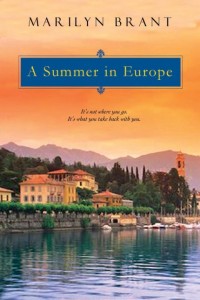 I wanted to like this book; I really did. It’s about traveling in Europe and learning who one really is. The author, Marilyn Brant, is local and knows people that I know. I’m likely to run into her someday and she’s an ex-teacher — all reasons that I should have liked this book better than I did.

Gwen is a thirty-year-old woman from Dubuque who has managed to become dull. She has a dull life and a dull boyfriend. She’s paralyzed by events from her past. She’s not a likely candidate for a romantic trip around Europe, yet she decides to go when offered a free trip with her aunt and her math-geek friends. Not surprisingly, she thaws out under the magic spell of Europe and frees herself from her past.

As I read this book, I kept thinking that it would make a better movie than it did a book. Brant’s imagery is luscious, and the quirky characters in the book would make a great ensemble movie like The Best Exotic Marigold Hotel. I could see the two handsome brothers, Thoreau and Emerson, sparring with each other in a cathedral. I could see the romantic leads feeding each other pastries all over Europe. As another reviewer mentioned, Nia Vardolos could play this part — she did it before in My Big Fat Greek Wedding.

Should you read it? Maybe, if you like travelogues. That’s why I gave it four stars. For the plot, it’s about a two and a half because of its clichéd plot line and because I think the characters are overwritten. There’s very little subtlety in any of them, and a lot of stereotyping of the secondary characters. Still, there’s Rome and Florence and Venice and Vienna and London and Paris, and they make up for a lot in this book.