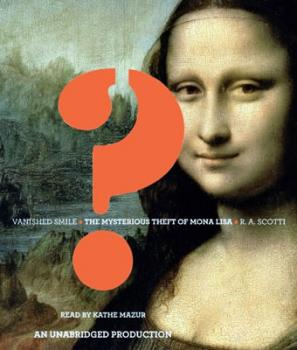 What is it about the Mona Lisa that makes her the media sensation she’s been for centuries? R.A. Scotti’s book, titled Vanished Smile: The Mystery of the Mona Lisa, attempts to answer that question.

The book centers on the theft of the Mona Lisa from the Louvre in 1911, and Scotti uses her crime-writer skills to build a past, present, and future for perhaps the most famous smile in the world. Pretty much everyone in the art world got involved, including an attempt to pin the theft on Pablo Picasso and Guillaume Apollinaire, who were both considered anti-establishment artists and possibly revolutionaries in pre-war Paris.

In our book club, people sometimes bewail the contemporary practice of skipping around from time period to time period and from character to character without a lot of notice. This book, however, is not one of those. Scotti tells the story of the theft and the attempts to recover the painting in a pretty linear fashion, but also includes the history of the painting and its artist, Leonardo da Vinci. It’s a fascinating read by a master storyteller.

Reading this book brought back our visit to The Louvre in 2010. Of course, we had to see the Mona Lisa on our first trip to Paris. We had no idea what to expect, but it certainly wasn’t this. 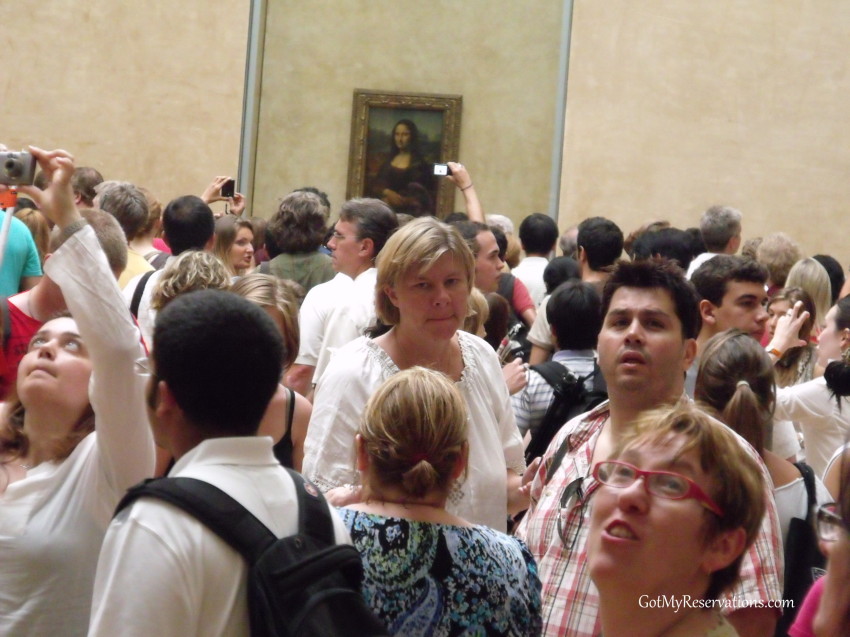 I’m the short person in the blue dress with the very tall lady in front of me looking the other way. A totally unflattering shot, but it expresses the moment when I first “saw” the Mona Lisa perfectly. 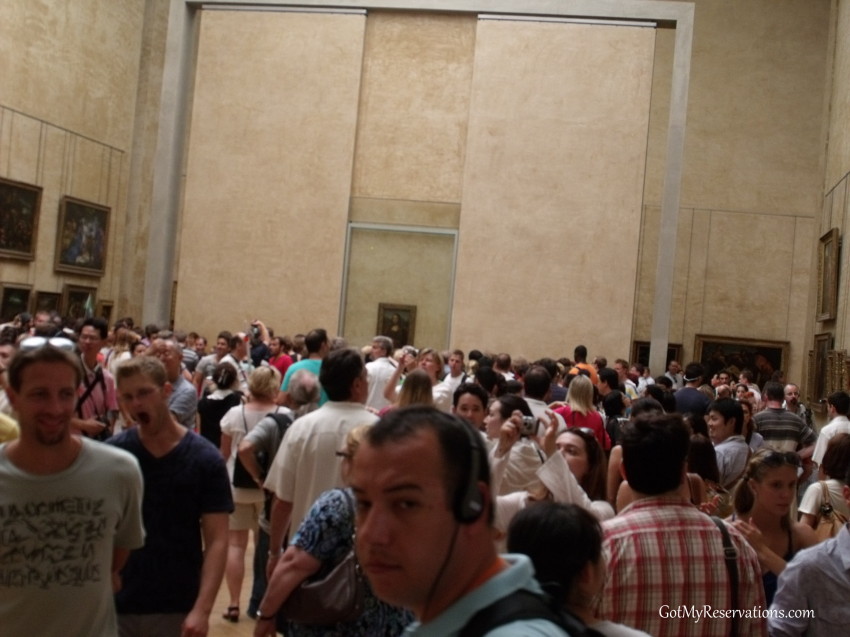 I’m still there in the blue dress.

After the theft and the recovery over two years later in 1913, the Louvre protected the painting more carefully. It did take a trip to the United States and was displayed in New York and Washington DC in December 1962 through March 1963. It also was exhibited in Tokyo and Moscow in 1974. Since that time, the Mona Lisa has not left the Louvre. 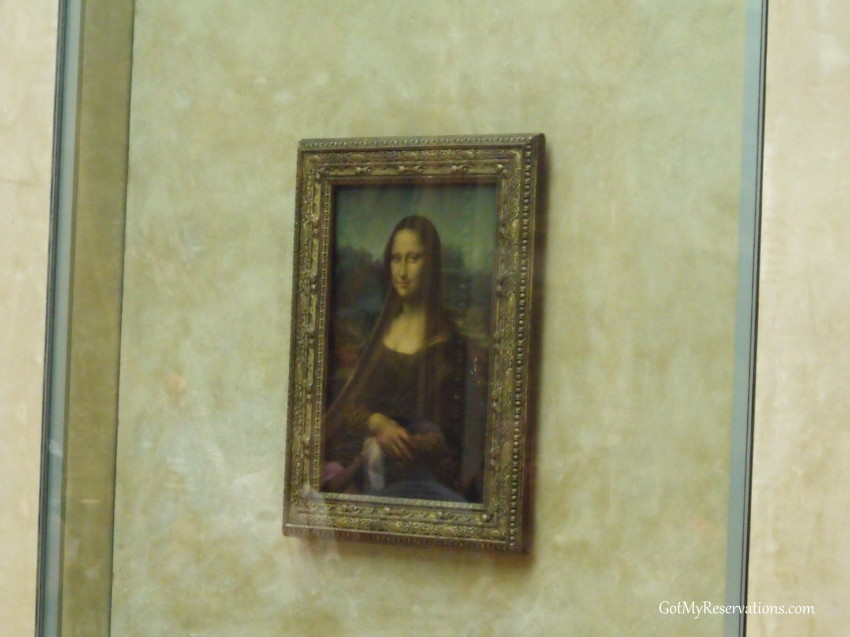 In this photo, you can see that the painting is recessed in a concrete bunker and covered with glass — layers of bulletproof glass that also provide climate control.

“On 6 April 2005—following a period of curatorial maintenance, recording, and analysis—the painting was moved to a new location within the museum’s Salle des États. It is displayed in a purpose-built, climate-controlled enclosure behind bulletproof glass. Since 2005 the painting has been illuminated by an LED lamp, and in 2013 a new 20 watt LED lamp was installed, specially designed for this painting. The lamp has a Colour Rendering Index up to 98, and minimizes infrared and ultraviolet radiation which could otherwise degrade the painting. The renovation of the gallery where the painting now resides was financed by the Japanese broadcaster Nippon Television” (source).

The day we visited The Louvre in July 2010, Paris was experiencing a heat wave and it was in the 95 degree Fahrenheit range outside. The Louvre palace has some climate control, of course, to protect the art work, but it wasn’t enough to handle the heat generated by the thousands of visitors who come to see Mona Lisa. These were not happy campers crowded together in this room to see a painting that is only 2′ 6″ x 1′ 9″ (77 cm x 53 cm). 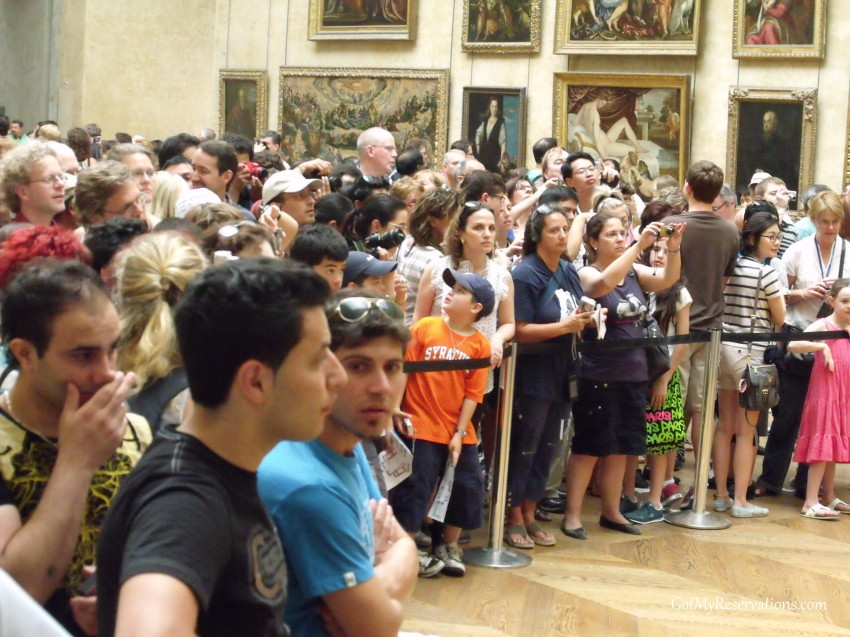 This is the first barrier to protect the painting from the crowds.

Mona Lisa has not been totally protected from harm since the theft, even though she is now considered the most famous painting in the world.

“In 1956, part of the painting was damaged when a vandal threw acid at it. On 30 December of that same year, the painting was damaged again when a rock was thrown at it, resulting in the loss of a speck of pigment near the left elbow, which was later restored. This use of bulletproof glass has shielded the Mona Lisa from more recent attacks. In April a “lame woman”, upset by the museum’s policy for disabled people, sprayed red paint at the painting while it was on display at the Tokyo National Museum. On August 2, 2009, a Russian woman, distraught over being denied French citizenship, threw a terra cotta mug or teacup, purchased at the museum, at the painting in the Louvre; the vessel shattered against the glass enclosure. In both cases, the painting was undamaged” (source).

As this photo shows, the Louvre now appears to be more aware of the needs of the disabled, but you can imagine the mood of this crowd when the wheelchair-bound viewer was pushed in front of everyone else. Really, they were trying to be nice. 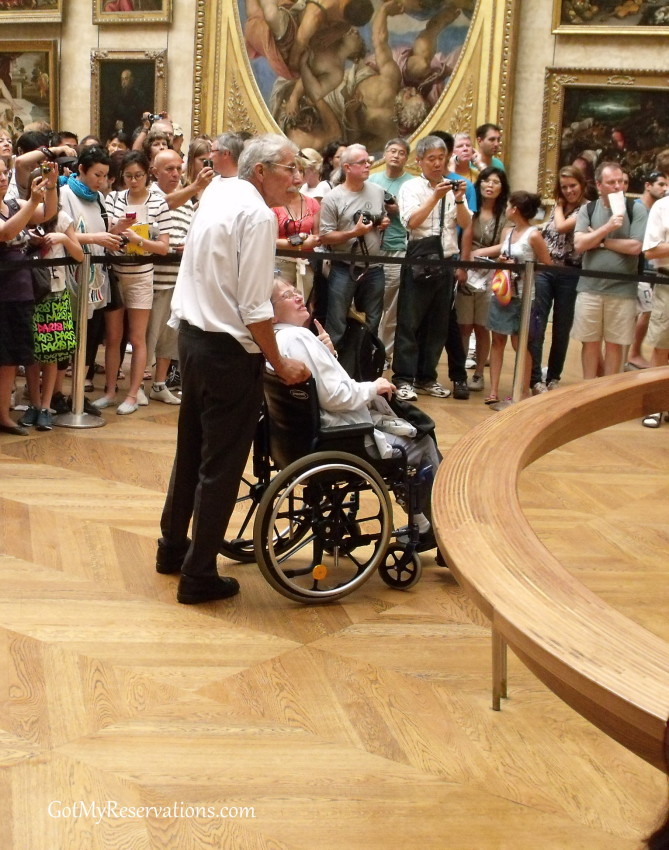 So who was Mona Lisa? Historians have made an identification based on certain pieces of evidence but no one knows for sure. In August 2013, the remains of Lisa Gherardini were exhumed in Florence in an attempt to match the facial skeletal structure to that of the woman in Da Vinci’s painting. Family members also hope to know for sure if Mona Lisa is actually their ancestor through DNA testing. For more information, here’s an interesting story from BBC World News about the exhumation.

Whoever the subject of Leonardo Da Vinci’s painting was, she is worth seeing, despite the crowds surrounding her. I hope you get the chance to visit her someday!

I’m linked up today to The Tablescaper for “Oh, The Places I’ve Been”, Travel Photo Monday” at Travel Photo Discovery, and “Travel Photo Thursday” at Budget Travelers Sandbox, so stop by and get some more inspiration for your travel bucket list!