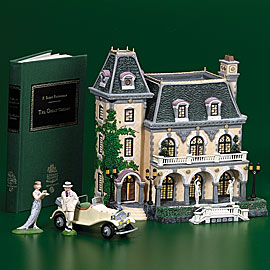 As  a confirmed Gatsby lover, I can hardly wait until the new movie comes out next week. My daughter and I are such fans of The Great Gatsby that I bought her a Department 56 lighted house. “Somehow” I still have that house…

Baz Luhrman’s new movie starring Leonardo DiCaprio as Jay Gatsby probably won’t be perfectly aligned to the book, but I’m pretty sure it will be an amazing take on what is considered to be one of best English language novels of the 20th Century.

I encourage you to read this wonderful post by the Head Butler, which includes an interview that sheds light on Scott and Zelda Fitzgerald and their relationships with friends who became characters in Fitzgerald’s stories. Sometimes they weren’t particularly flattering, as we see in The Great Gatsby.

Where will you be on Friday, May 10? I’ll be at Randhurst sitting in a comfy rocking chair enjoying The Great Gatsby!