Jane Odiwe’s Jane Austen sequels have been sitting on my Goodreads list for a while. I haven’t had much success with Austen sequels; most writers have tried to match Austen’s witty prose and failed and then replaced the wittiness with sex. They were boring and an insult to my beloved Jane’s memory. Some even added zombies and sea monsters to the mix. This one was different and deserves the 4 out of 5 star ratings it receives on both amazon.com and Goodreads. 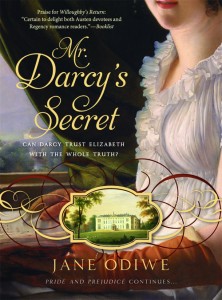 Elizabeth and Darcy arrive at Pemberley after their marriage, ready to begin a new chapter in their lives. Lizzy is learning to be the mistress of a great estate and in order to encourage Georgiana to be more outgoing, a great ball for her society debut is held at Pemberley. Of course, there is the usual Austen drama involving class struggles, and Elizabeth also tries to reconcile Lady Catherine with Darcy after their falling out over the marriage.

While its suggestive title may lead one to believe otherwise, Mr. Darcy’s Secret is primarily about Georgiana’s love story. She struggles with accepting a marriage proposal from an eligible but indifferent  suitor but wants to be dutiful and obey her strong-minded and well-meaning brother. All the while,  she is indulging in innocent flirtation with an entirely unsuitable prospect, the landscape architect hired to do some design work on Pemberley’s gardens. As in Jane Austen’s stories, how Georgiana resolves her dilemma is the main story line — and of course, it resolves in a fully Janeite way.

The title refers to a skeleton from Pemberley’s past that the Darcys have in their closet. Trust Caroline Bingley and the local gossip Mrs. Eaton to try to destroy Elizabeth and Darcy’s happy new marriage with hints of secret affairs and illegitimate children, requiring a stiff upper lip and a lot of standing by her man by Elizabeth.

Jane Odiwe uses Austen’s voice effectively, especially when she mimics Mrs. Bennett and Lady Catherine de Bourge, and she continues the characterization created by Austen in her books. All of your favorite characters from Pride and Prejudice show up for their cameos, including the Bingleys, the Bennetts, the Wickhams, the Collinses, the Gardiners and of course Elizabeth and Fitzwilliam Darcy.

While thinking about what I would match up with Mr. Darcy’s Secret for my Bookin’ and Cookin’ series, I stumbled across a wonderful resource. Created by the Jane Austen Centre in Bath, the website has many interesting bits and bobs about Jane. Here also, Janeites can find Regency recipes that Austen’s characters might have been eating, with modern remixes for modern cooks. Spinach Herb Quiche has an interesting history; it is originally a torta recipe from the Renaissance cookbook written by Platina in 1465 and then collected and republished as Cariodoc’s Miscellany by David Friedman and Elizabeth Cook.

A modern remix of an ancient recipe from Renaissance cookbook author, Platina, a Regency version of Spinach Herb Quiche might easily have appeared on the table at Pemberley.

Chop all herbs and spinach in food processor. Place in the pie shell.

Grate cheese or chop in food processor. Layer on top of herbs and spinach mixture in pie shell.

Mix milk and eggs together. Pour over greens and cheese mixture in pie shell.

Season with salt and pepper to taste.

Bake in 400 degree oven for 10 minutes; then lower heat to 350 degrees and bake for about another 40 minutes.

Let rest before cutting into wedges for serving.

While this recipe was fun to make and we enjoyed the unique taste of the herbs, you might prefer my all-time favorite from Julia Child -- Quiche au Fromage de Gruyère, Hambon et Brocoli