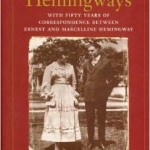 Originally published in 1962 after the suicide of her famous brother, Marcelline Hemingway Sanford shares stories of growing up with her brother and very family. With their primary residence in Oak Park, Illinois, and their summer home at Walloon Lake, Michigan, I found these local stories interesting just for their history. A newer edition was published in 1998 for the centennial of Hemingway’s birth, and includes correspondence between Ernest and his sister Marcelline. Hemingway’s experiences as a child and young man in Illinois and Michigan, as well as his time in Italy, Paris, and Spain are part of this treasure trove of Hemingway history. Marcelline Hemingway Sanford’s writing is clean and her narratives move along crisply, with wonderful characterization of the family members and friends who influenced Ernest Hemingway. END_OF_DOCUMENT_TOKEN_TO_BE_REPLACED