I have read a lot of novels set in English villages, many in the years before I actually experienced them. They usually have a predictable group of inhabitants, including an often curmudgeonly-but-charming primary character, surrounded by secondary characters who revolve around him or her.  Major Pettigrew’s Last Stand by Helen Simonson is one of those novels, yet it is much more at the same time. 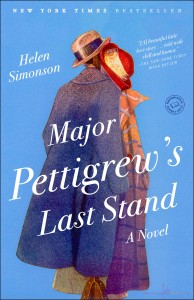 A widowed British army officer lives in his family cottage in the small town of Edgecombe St. Mary and is proud that he lives an upright, circumspect life in his retirement, filled with golf, gentlemanly shooting, and books. The unexpected death of his brother changes everything, and leads him into an unlikely friendship with the local shopkeeper, a Pakistani woman who is also widowed and shares his love of reading. As their relationship changes, Major Pettigrew must take a stand about many traditions and cultural issues that confront him as a result of his friendship with Mrs. Ali, and from there comes the title of the book.

It would not surprise me if modern day villages in rural England teeter precariously between acceptance and prejudice when confronted with residents from other cultures, as Simonson illustrates in this novel. Although she builds snapshot-like caricatures of many of the characters in the book,  I’ve seen the dichotomy for myself in the tiny hamlet of Sissinghurst, where the local convenience store and the curry palace next door are both run by Indian or Pakistani owners, right down the street from a traditional English pub and a chips take-away shop. I’ve also been treated as a brash American, even when doing my best to blend in and follow social mores. Major Pettigrew’s Last Stand takes the  literary construct of the English village life and gently smacks the reader in the face with white gloves; as you read, you hope against hope that people will do the honorable thing. This book is all about how much you will tolerate; where does your prejudice get in the way of your honor, and where do you draw your own line in the sand?

I thoroughly enjoyed Major Pettigrew’s Last Stand and highly recommend it for readers who enjoy this genre. For more insight into this book, read Alexander McCall Smith’s review here. I listened to it on audiobook and enjoyed Peter Altschuler’s narration;  you can also get it from Amazon.com here.

From sweet and heart-warming, we move to a twisted, Gothic romance. I decided to read A Reliable Wife by Robert Goolrick because one of my favorite bloggers is doing a series on books about wives. I had already read The Paris Wife and American Wife (see my review in the link), so it was only natural that I would also want to see what came next. We were all in for a surprise ! 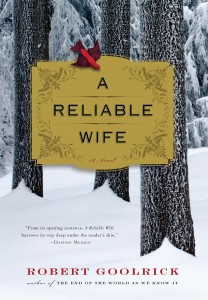 Do not click into the links if you don’t want spoilers!

Emily at The Bookshelf of Emily J hated The Reliable Wife, Ariel at One Little Library had mixed feelings, Angela at Persephone Writes didn’t finish it, and Audra at Unabridged Chick loved it. That in itself would have been enough to make me want to read it — but I’m really glad I read it myself before reading their reviews, because I couldn’t put it down.

Set in bleak Wisconsin and bawdy, tawdry St. Louis and Chicago at the turn of the 20th century, A Reliable Wife tells the story of a trio of obsessive, depraved people who are interrelated in their passions and their unhappy psyches. Ralph Truitt has advertised for “a reliable wife” to join him in the company town that is supported by his factories and enterprises (reminds me of Kohler, Wisconsin). A packet of lies arrive along with Catherine Land, who we quickly find out has plans to murder him for his money — but very slowly, with arsenic that cannot easily be detected — in order to live in style with her younger lover. Robert Goolrick leads us skillfully through the dark twists of this plot and I was surprised how it turned out — and novelists rarely surprise me.

Because at its heart, this book is about sexual obsession and love and what they do to relationships, good and bad, Goolrick packs in the sex. Reviewers complain that the role of the wife is demeaned by this novel, that being a wife isn’t only about a sexual relationship. Others have looked into Goolrick’s past; his autobiography tells us that his own relationships have not been very successful. I did not find the sex to be gratuitous, and felt that it was important to the telling of this gritty story.

Readers who love finding literary allusions will see many; I kept thinking the people from Taliesen in Loving Frank were going to stop by to visit and add to the macabre scene in Truitt, Wisconsin, and I hoped through the whole book that Catherine’s secret garden would rescue her.

A Reliable Wife has been optioned for a movie, and is currently in development. Its wintry snowscapes and luscious scenes of illicit love combined with this Gothic tale will surely make an interesting film!

I encourage you to go back and read the comments on A Reliable Wife after you have finished it, and leave a comment of your own for the book club. If you are interested in reading along with the series, the August 1 novel is The Aviator’s Wife by Melanie Benjamin, a novel about Charles and Anne Lindburgh. I’m adding it to my list!