The Christmas tree is put away, the comfortable chairs are back in the window, and there’s a fresh coating of snow outside. It seems like the perfect day to take a visit to Germany in the Winter’s Blue Tablescape. 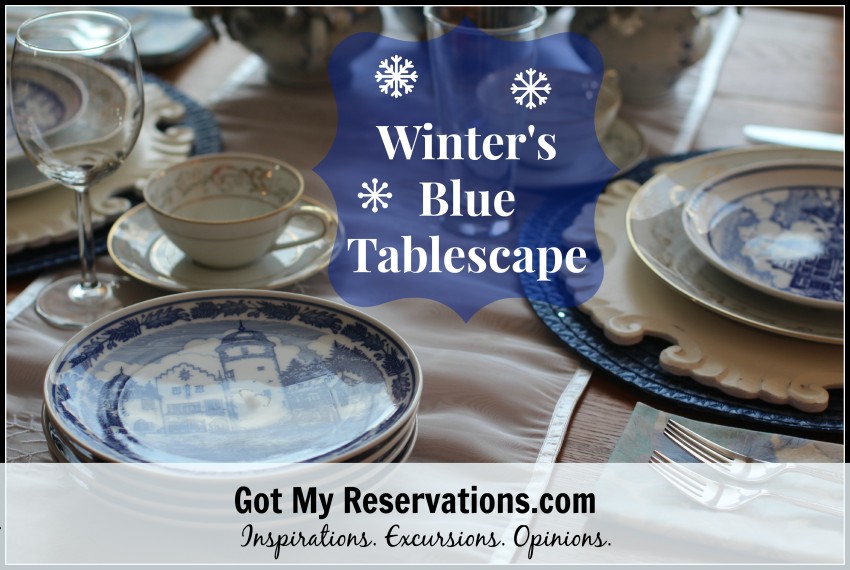 I’ve talked about my next door neighbor and her dishes many times. The tableware and decor items that I selected (and salvaged from destruction) from her estate sales have been sources of inspiration for tablescapes, including Paperwhites in a Punch Bowl, Family Reunion Gifts Bring a Sunflower Tablescape, and most recently, Downton Abbey Tablescape for the Servantless Home Decorator. Her house remodel is almost finished by the flippers and it is up for sale; hopefully we will soon have a lovely family living in Oksana’s home and bringing life back to it after almost six years. Today I’m honoring her once again with a tablescape inspired by her set of Hutschenreuther collectors’ plates, each with a different scene from a German village. END_OF_DOCUMENT_TOKEN_TO_BE_REPLACED

Yesterday I finished Erik Larson’s In the Garden of Beasts: Love, Terror, and an American Family in Hitler’s Berlin. After two previous slow starts, I read three-quarters of the book and it became a compelling read that I could barely put down.

How did we let Hitler get away with it? That particular piece of history absolutely should not repeat itself, yet it has in other ways and in other societies across the world. Should the United States be held responsible? Larsen creates a very personal story that reminds us that at least in regard to Hitler’s rise to power, we knew about it and didn’t do anything until it was too late for many European citizens.

Tom Hanks has signed on to star as University of Chicago professor-turned-ambassador William E. Dodd in a movie based on the book, scheduled for release in 2014. Given his ability to play low-key, gentle characters with sensitivity and historical accuracy, Hanks should be wonderful. I look forward to seeing the movie — it’s a long time until it comes out, though. In the meantime, I recommend that you read this riveting non-fiction and very personal account of a family’s relationship with Hitler’s Germany.