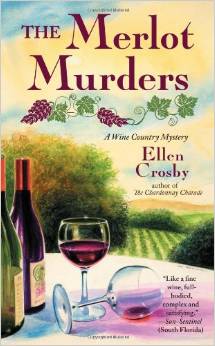 When I’m traveling in my car, I usually choose light cozy books in which I’m unlikely to be shocked by overt sex and graphic language, since one can hear my speakers outside of my car if I’m at an intersection or in a parking lot. That was one of the reasons I chose The Merlot Murders by Ellen Crosby; it looked interesting but also safe. I was also intrigued by the idea of a book based in Virginia’s wine country, rather than California or France. My choice did not disappoint; it’s an easy murder mystery with enough intrigue and surprise built into the plot to keep me guessing. The book is the first of a series about Lucie Montgomery and her family’s winery, and I was encouraged enough by the first book to go on to the second. The Chardonnay Charade was just what I expected — another cozy murder mystery with a little romantic spice built into the story. Thank goodness my library has the books so I don’t have to keep buying them; I just put holds on the other four titles and will enjoy spinning through them over the next few weeks.

Enough about wine. Let’s get to the cheese.

We all love Castle, right? The sophisticated mix of crime, humor, and love is captivating in the television show.

Given that, I decided to read the spin-off book from the show, Heatwave by Richard Castle. I didn’t get very far. It reads like Kate Beckett treats Richard Castle in the first season and if this was what best-selling author Richard Castle was producing, I would be skeptical too. I can’t imagine that anyone would actually buy more than one of the fictional Richard Castle murder mysteries–they are just too cheesy, and not at all what I would expect that the intelligent and sensitive character of Richard Castle (played by hunky Nathan Fillion) would write. Not everyone agrees with me, so I encourage you to read other reviews if you are intrigued. I wasn’t interested enough to finish the book.

There you have it — wine and cheese for your weekend pleasure. For those of you who plan to watch the premiere of Season 7 on Monday, here’s a teaser interview with Nathan Fillion. So cute…

2 thoughts on “The Saturday Review: Wine and Cheese”