I really wanted to love this book. 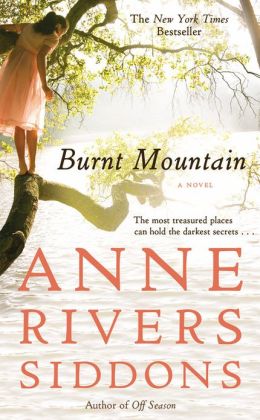 Having just come back from my first visit to Atlanta, I was very excited to read Anne Rivers Siddons’s newest novel. I was totally ready to immerse myself into the intriguing characterization and poetic descriptions that inhabit Siddons’s previous novels, which are set in and around Atlanta.

Parts of the book were really fun; I now could visualize Buckhead and the Chattahootchie River in my head. As we drove through Buckhead, my head was practically spinning, looking at the beautiful homes similar to the ones in which the characters in this book live. We had dinner at Ray’s on the River. I actually had been to the places the author was describing.

The problem came with the actual story.

Usually Siddons draws the reader through a sticky Atlanta tale with intrigue, mystery and mysticism, and often betrayal. Burnt Mountain had all of these elements, but they didn’t come together in a satisfying conclusion.

Thayer Wentworth should have come out of her childhood tragedies with a Southern will of steel; that’s what the “real” Anne River Siddons would do with her main character. Instead, Thayer is wishy-washy and vulnerable, and not in a good way. Her marriage to an Irish literature professor starts out strong as she defies her controlling mother, and her beloved grandmother’s cautionary remark about Aengus not falling too deeply into his Celt legends gives us good foreshadowing of what’s to come. But that’s where this novel starts to fall apart. We never actually learn the secret that eventually tears apart their marriage and we are annoyed with Siddons for giving up on the story before its conclusion. It’s like she is trying to have this the first book of a series — maybe we’ll actually find out what happened on Burnt Mountain in the sequel. Unfortunately, I don’t think that’s the case.

Several reviewers suggest that the book was rushed into print and that accounts for its issues. In addition to the problems with the story not having a satisfying beginning, middle, and end, Siddons’s timelines are all wrong and the book needed significant editing in that respect. The Atlanta Olympics (1996), common use of cell phones (late 1990s into 2000s), Harry Potter books (United States publication 1998) are all jumbled together.

I’m not giving up on Anne Rivers Siddons

All in all, if you are an Anne Rivers Siddons fan prior to reading this book, you will likely read it anyway. I would hate for this gifted writer to have thrown away her career by allowing this book to go to publication.

If you are not familiar with Siddons’s work, try her masterpiece Colony, or for a dose of ghostly mystery, The House Next Door. Her body of work shows that she is a master of storytelling, and I will definitely read The Girls of August when it comes out in July.