For months I’d been planning to do homage to Edgar Allan Poe, the literary master of scary stuff, for my Halloween tablescape. I bought a raven statue as soon as they went on special the first time at Michael’s.  Imagine my surprise when I started seeing black birds on all the table displays at my favorite stores. I was absolutely crushed that I wasn’t original. I got over that when I realized that pretty much everyone in tablescaping land has black birds in their stash, and so with only one day to go, I set up my Quoth the Raven tablescape. 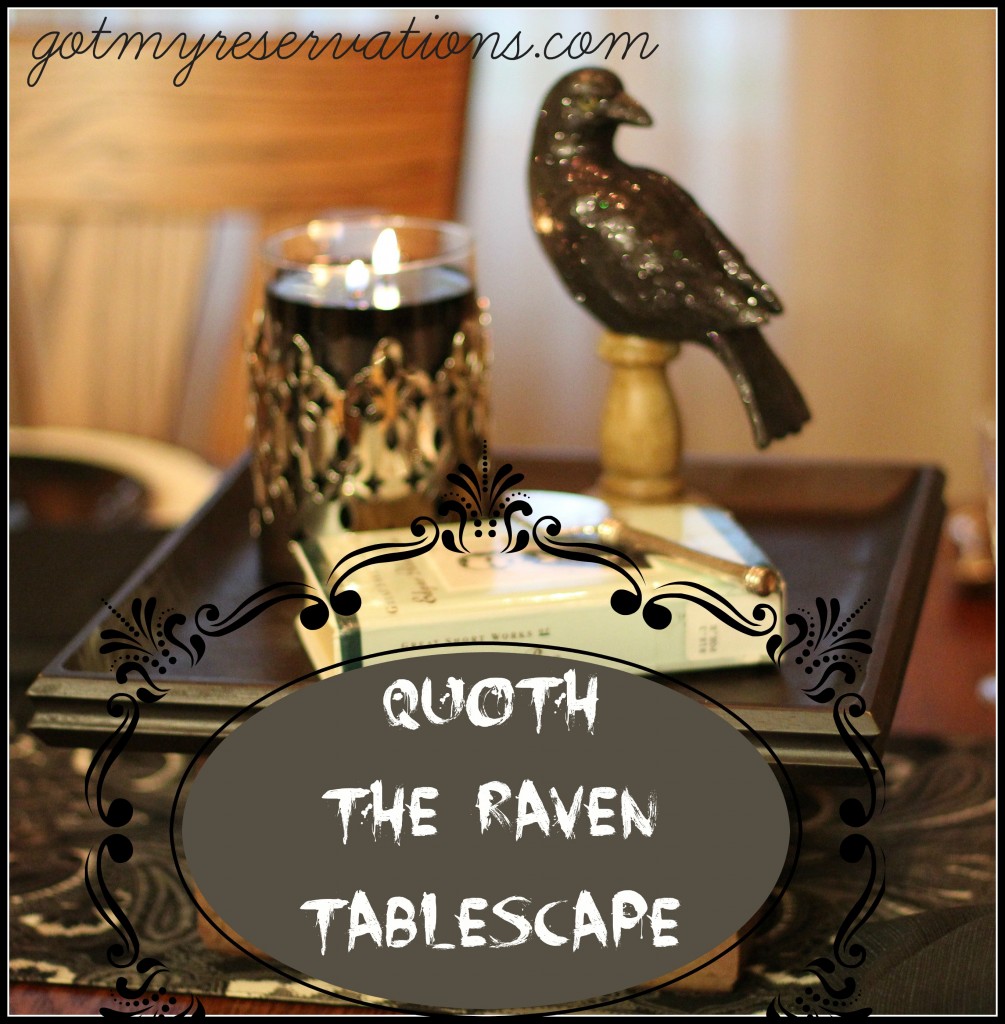 As my students of the last 20 years know, Poe is considered the first American detective fiction writer and one of the earliest American short story authors. His inspiration was from Europe’s Gothic Romantic style, which included Mary Shelley’s Frankenstein. He believed that one should be able to read a story in one sitting — about 30 minutes or less — and that the setting should be vague so that the reader wasn’t distracted by reality. His characters often weren’t named, and when they were, they had witty or punny names, such as Fortunato in The Cask of Amontillado, who was murdered. Not so fortunate, after all. 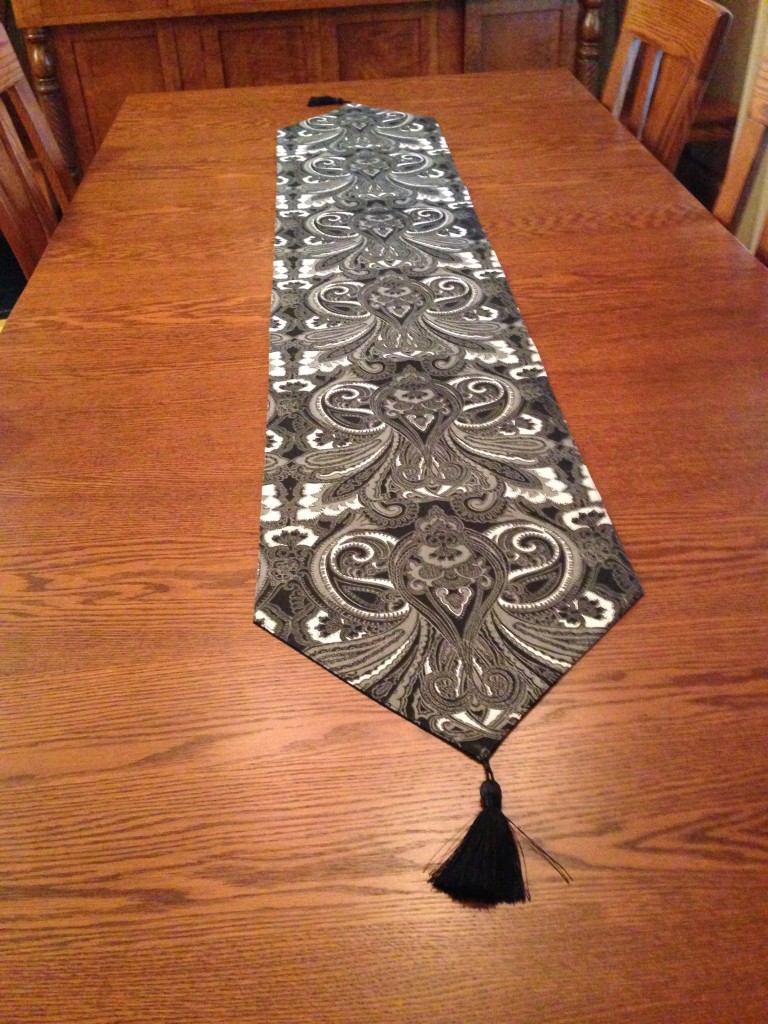 Since Poe wrote his stories in the first half of the 19th century, I decided to keep the tablescape as historically accurate as I could. I started with my bare wood table and added the paisley runner. Paisley became popular when British colonialists brought the distinctive cloth patterns back from India in the 18th and 19th centuries.

I became enamored of the stories of Paul Revere and the pewter and silver craft of the American colonialists early in my youthful travels, so of course I saw pewter chargers and goblets as a part of this story.

My Pfaltzgraff Filigree does its duty as an antique-style stoneware plate, and the modern black accent plates I picked up at Goodwill for 25 cents each start to build a mood. Mom’s Gorham Chantilly sterling flatware and antique silver napkin rings continue the Gothic atmosphere. 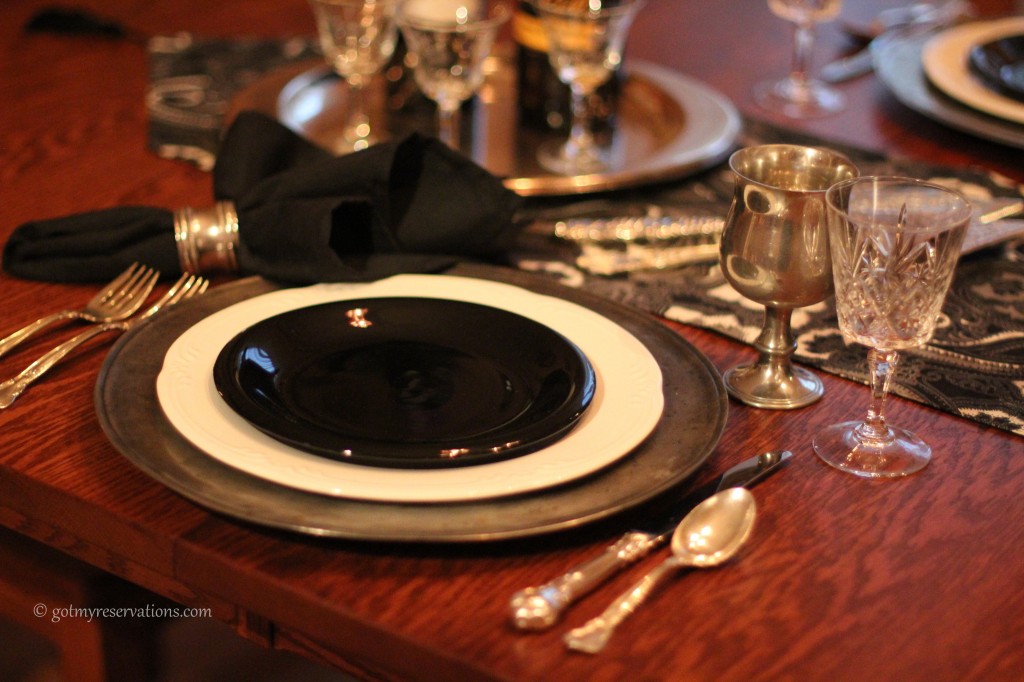 And then I began to add the genius that was Poe. I created a tribute to The Cask of Amontillado (complete ebook here), with a silver tray offering wine and sherry served in delicate antique cordial glasses. World Market carried a group of Halloween-themed red wines this year, so of course I had to buy one for my ‘scape. 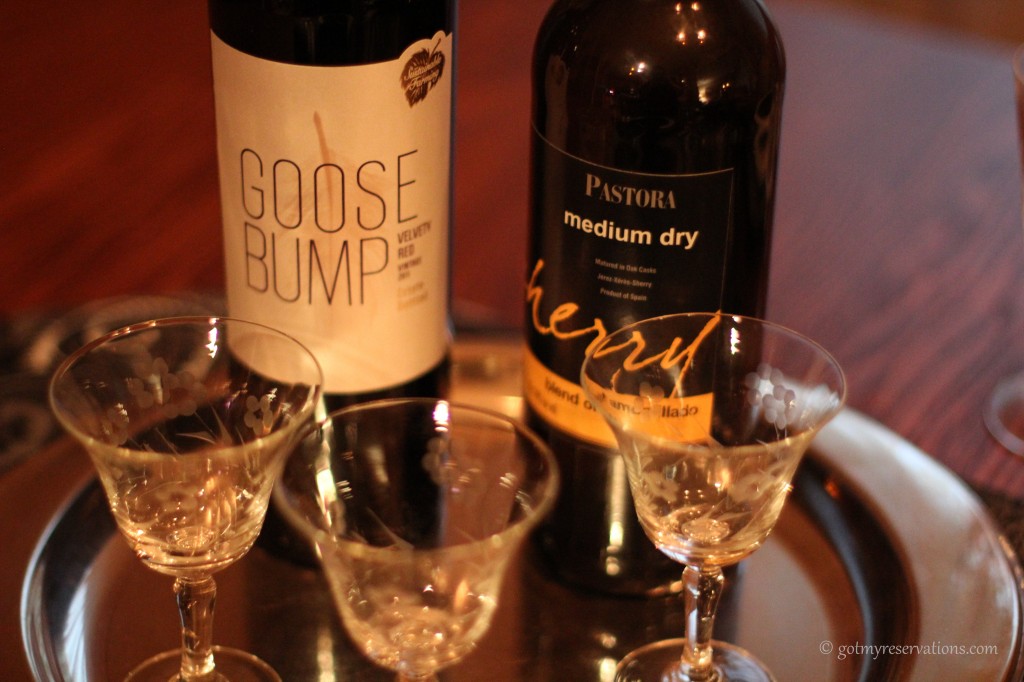 The silver serving pieces are reminiscent of the trowels used to wall up Fortunato in Poe’s macabre tale. 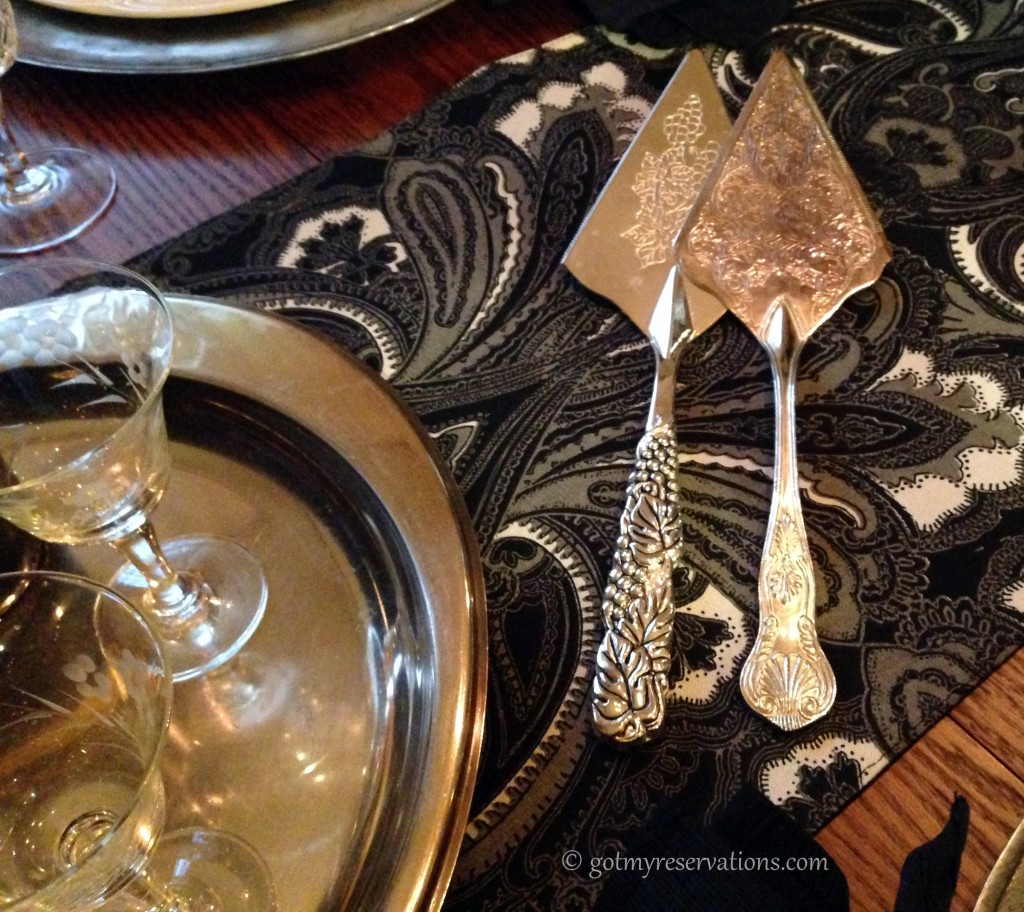 The centerpiece honors three of Poe’s classics, starting with bricks from The Cask of Amontillado. 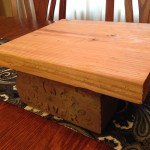 My original floorboard was just too ugly, so I substituted a sale-rack black tray from Target ($4.99) to remind us of the beating heart hidden under the floorboards in The Tell-Tale Heart (complete text and MP3 audio file here). I’m not sure when the current trend for ebonized floors started, but I’m going with it in this ‘scape. 🙂 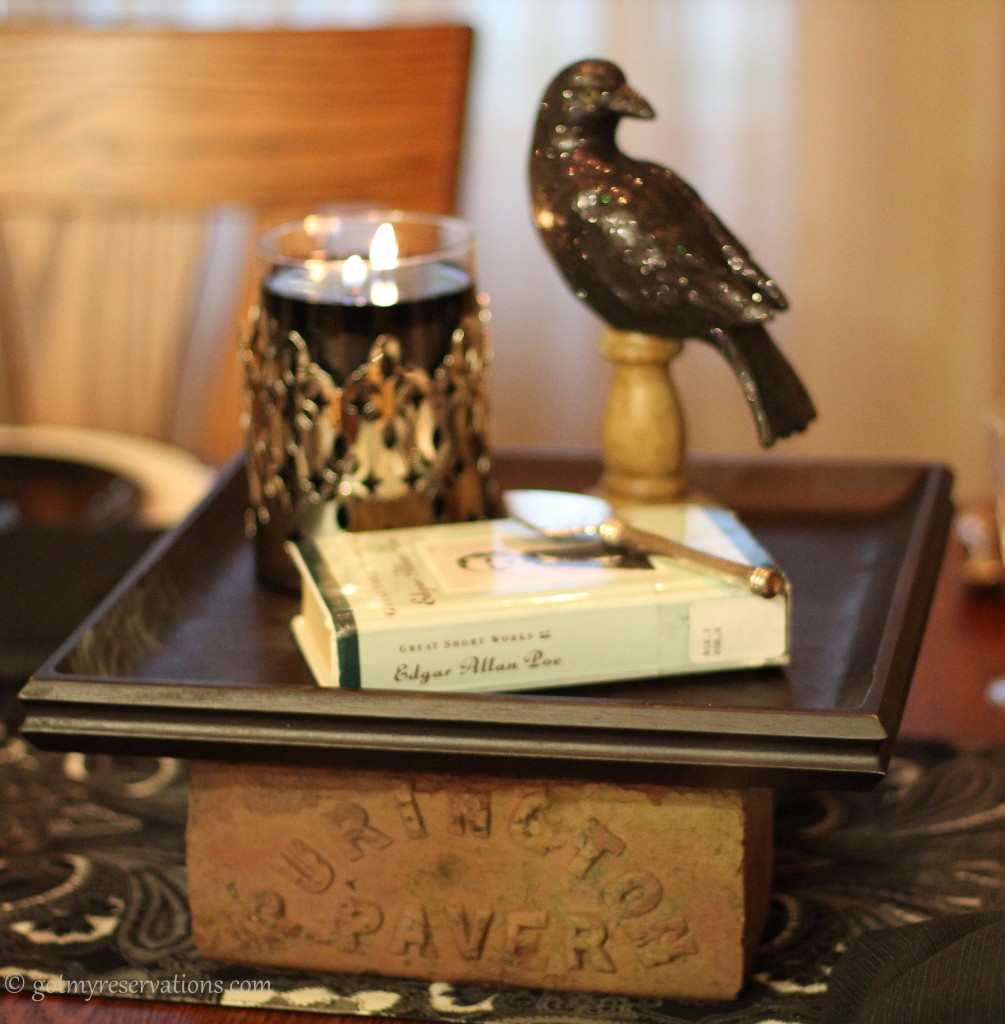 With a nod to the lantern with which the narrator of TTH spies on the hapless victim, I added a new pierced candle holder and a black jar candle from Yankee Candle. There’s our raven, of course, and another “trowel” for The Cask of Amontillado. I encourage you to read this contemporary essay about The Raven, written in 1849, the year of Poe’s death. 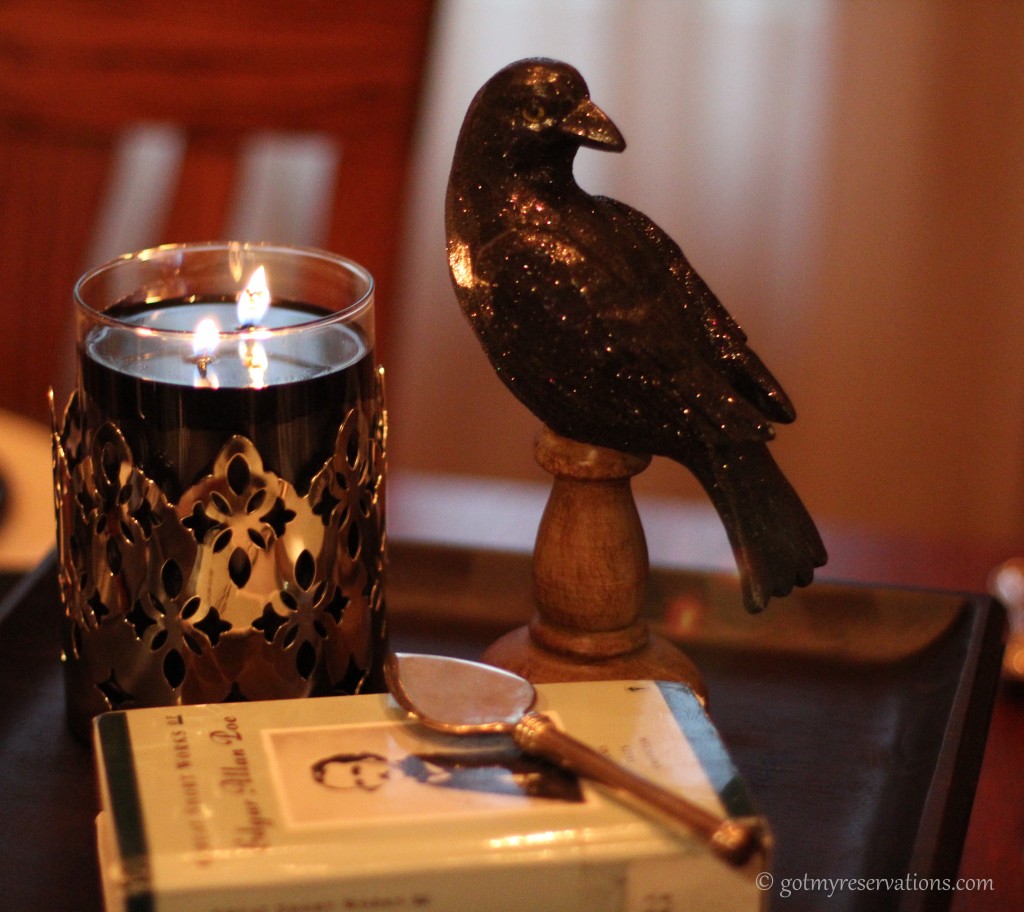 Edgar Allan Poe was the daddy of American mystery writers, and authors such as Stephen King and Peter Straub follow in his scary footsteps. I’ve included a vignette of old and new on the table, with several editions of Poe tales and poetry, and an anthology entitled Poe’s Children. It was put together by Peter Straub to remind us that good literary horror fiction can scare the bejeezus out of us without being cheesy. 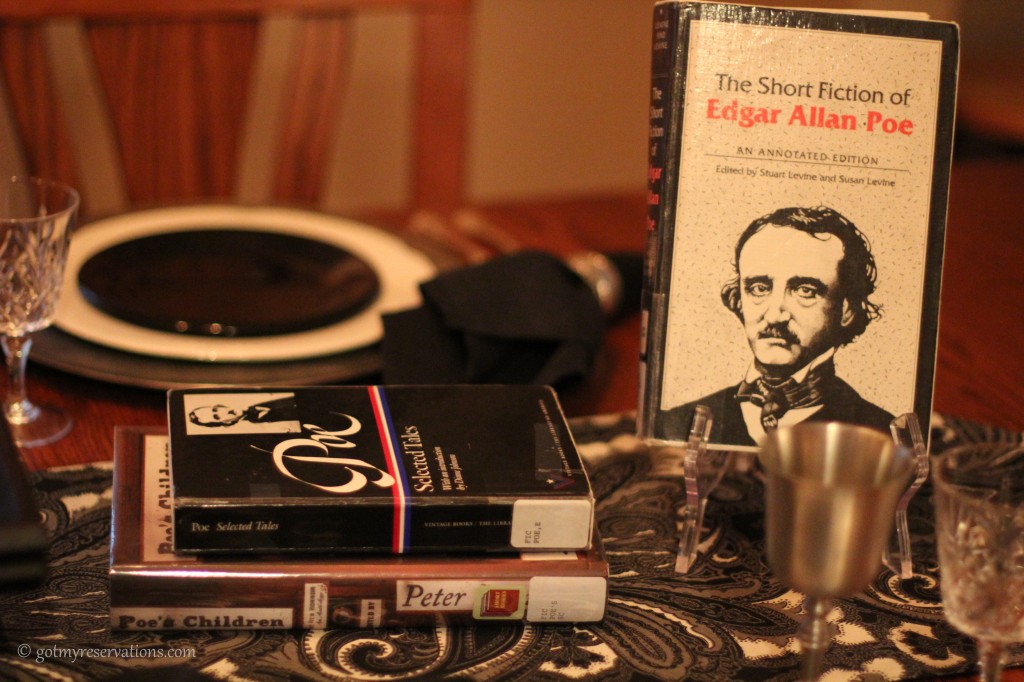 We ate dinner at the table last night, surrounded by these nods to Poe, and it was strangely comforting. I enjoyed teaching the magic of Edgar Allan Poe to a generation of students. The coconut-scented candle, however, had a somewhat incongruous note — what we will do for art!

I’m linking up this week at The Scoop at Confessions of a Plate Addict, We Call It Olde at We Call It Junkin’, Centerpiece Wednesday at The Style Sisters,  Let’s Dish with Cuisine Kathleen,  Open House Party with No Minimalist Here,  and Tablescape Thursday at Between Naps on the Porch. Be sure to visit these creative bloggers for lovely photos and inspiration.

9 thoughts on “Quoth The Raven Tablescape”