In this Friday series, I combine two of my favorite things, reading and cooking. That probably means there will also be discussion of more than a few books made into movies. I hope that you will be moved to offer suggestions for other reads that will be “palateable”! 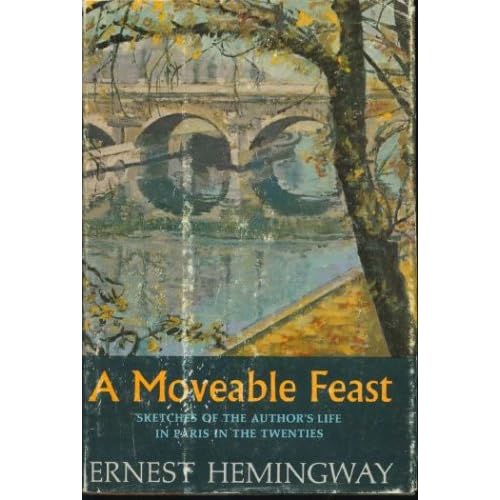 If you’ve been reading my blog for a while, you are likely to remember that I spent most of last year enjoying books about France and books and movies set in France to improve my cultural knowledge before my summer 2010 trip to Paris and Normandy. Although I purchased Ernest Hemingway’s A Moveable Feast

before the trip, somehow I didn’t quite get around to reading it until after we came home. As it turns out, I’m glad that it worked out that way, because A Moveable Feast

is truly a feast for the reader as Hemingway presents the banquet of experiences that was Paris in the 1920s.

Paris is not the same today as it was during Hemingway’s years there, but I was certainly charmed by both the magic of Paris and the magic of Hemingway’s sharp, clear text structure. I could imagine myself at Shakespeare and Company

and at Les Deux Magots enjoying wine or coffee along with fabulous people-watching. Surrounded by a cloud of literary and artistic angels, Hemingway’s book of essays is a must read. If you read them as a inexperienced high school student, read A Moveable Feast again.

Following our stay in Paris, we moved on to a river cruise along the Seine from Paris to Normandy. It was enchanting and relaxing after the bustle of Paris and our tour of the D-Day beaches was a moving highlight of the cruise, but an equally important part of the trip was the extraordinary food. I am still marveling at the ease of traveling on a riverboat with only 150 passengers — the most difficult part of the restaurant experience was making sure there was a table that would fit our group of six. With only one seating, the tables filled up quickly. I have only positive things to say about traveling on the Viking Spirit. Just in case you’re worried about traveling in France as I was, don’t worry. We found most of the people we met delightful and it was a wonderful trip — I blogged about my reactions here when we returned.

So,  I will leave you with a Viking recipe for gougères, a French cheese biscuit that is often served as an appetizer. It’s super easy to make and very tasty. Thanks to Viking Cruise Lines for this recipe, which I borrowed verbatim from their Facebook page.

Gougères are among the most popular hors d’oeuvres in France. A traditional specialty of the Burgundy region, gruyères are often made with gruyère cheese, but sometimes other cheeses (such as parmesan) are used to add an extra depth. Enjoy gougères with a glass (or two) of good French wine. Experience a little piece of France at home with this delicious recipe.

One and one-half cups water

Using a tablespoon, drop 48 equal mounds of dough onto parchment-lined baking sheets, spacing each mound three inches apart. Bake until dough is puffed, and looks dry and golden brown, about 30 minutes. Halfway though cooking, reverse the positions of the baking pans.