This post was originally published on Journeys with Jennie on January 9, 2010. I revisit it today because I so wish Joann were here to share my excitement about going to France. I’ve fear I’ve read too much about the Parisians, however, — my usually stalwart soul has been a little intimidated by all the negative comments about the rudeness of Paris citizens in the memoirs I have read. I figured I needed some positive vibes about Paris,  so I watched Julie and Julia again to buoy up my spirits. Despite all of the times I have watched the movie, I never listened to the commentary by Nora Ephron. If you have not done so, DO IT NOW! It is illuminating and gives a fresh perspective on a lovely movie. And thank you to Suzanne, Terri, Michele, Lisa, Tim, Martha, and Dorothy, who all said that I was crazy to worry about being in Paris. I love you and I will eat multiple pastries in your honor.

On Monday it will be eleven years since my beloved mother-in-law passed away. Joann was a child of the Depression, raised on a farm in Ohio, and was a part of a close-knit Mennonite family. Her trajectory from a stunningly beautiful young woman at Goshen College, through her years as a respected and beloved teacher in Rye, New York, and finally to her retirement in Arizona as the “hostess with the mostest” is one to be admired. She was kind, generous, and although she was not without her mistakes, she welcomed me and my son into her family with open arms. I miss her every day. Since we inherited some of Joann’s prized possessions, including her cookbook collection, I am surrounded by memories of her. This is how I came to have a 1961 copy of Mastering the Art of French Cooking on my bookshelf. 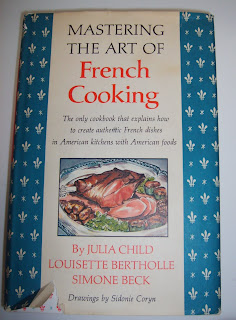 At some point in her mature adult years Joann became enamored of all things “Country French.” Although she and my father-in-law traveled extensively in the United States when their sons were young, they turned their sights farther afield when the boys left the nest. They traveled all over Europe and went to Russia, Egypt, and India. They were on one of the first tourist groups into China and regaled us with the stories of the “luxurious” dormitory-style accommodations those early groups encountered. She tracked down her Mennonite relatives in France and visited the ancestral farm. Joann and Art hoped to instill their love of travel in their grandchildren and took each of them on a trip of his or her choosing for a graduation present. But, Joann wasn’t just cruising through these countries. Among her books are photo essays on the culture, furniture, ceramics, glassware, and art of the places she visited and wanted to visit. Joann’s amazing intellectual curiosity and love of beautiful things kept her vibrant right up until her last days. 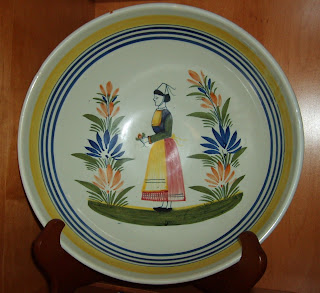 It was always France that drew her back, though. She collected French pottery and furniture, and redecorated her houses around her collections. She scoured antique stores looking for just the right piece and it seemed like she bought every piece of Quimper that she ever encountered. As I have studied Quimper faience pottery, however, I find that she did actually specialize, and it is interesting that Joann mostly bought pieces from the Henriot factory that were made in the early 1900s during war times in France. Maybe it was the relatively inexpensive price, but I’d like to think that the earthy Breton peasant people who inhabit these plates reminded Joann of her farm roots, even though she moved far away from them as an adult.

The other thing that Joann collected and educated herself about was cookbooks and cooking. She found that when she moved to suburban New York she needed to upgrade her expertise and staple recipes in order to participate appropriately in her new social circles. In her cookbook, she would write the date and a list of the guests next to the recipe that she served them so that she would not repeat it the next time, and this is something my husband and I still do today. Joann’s cookbooks are a treasure trove of information about the life she and Art lived and how they entertained, and they bring back memories of meals that she cooked for us. I can remember being picked up at the airport after a trip through O’Hare and La Guardia airports with two small children at Christmas time, and arriving in Rye to find an amazing meal almost ready for us. She purchased jumbo shrimp through a seafood buyer — they really were jumbo, that’s not an oxymoron! — and we always looked forward to her cooking.

So, that brings us back to Mastering the Art of French Cooking. There are parallels to be found between Joann and Julia. Both were women who reinvented themselves as their lives demanded. Although Julia was not blessed with children, her life-long love affair with her husband is similar to the more than fifty happy years of marriage Joann and Art enjoyed. One of the reasons that Julia learned to cook was that she needed to entertain Paul Child’s business associates, and by the time Mastering the Art of French Cooking was published in 1961, Joann was also trying to be an executive wife to her upwardly mobile husband.

It is disappointing to me to find out that apparently she did not use this cookbook because it is almost pristinely clean. You can see from my photo that it still has its original dust jacket with just a small tear in it. I wonder where she got it; did she buy the cookbook herself or did someone give it to her? It is a Book Club edition; did she get it because it was the most popular cookbook of its day and it just came automatically? I wish I could ask her, but both she and Art are now gone and the minutiae of their daily lives is gone with them. Since, thanks to Joann and Art, I live with beautiful antiques all of the time, I refuse to feel guilty about using my 49 year old copy of Julia. I intend to read it, to cook from it, and that will probably include getting it dirty. We will write in it just as Joann taught us, and I can’t help but think that both she and Julia would be proud. Je t’aime, Joann.

6 thoughts on “Julia and Joann Revisited”